The EU’s appointments of the Belgian prime minister Herman van Rompuy (what comical names these foreigners do have![1]) as permanent Chairman (“President”) of the European Council, and (subject to the approval of the European parliament) of the EU’s (British) Commissioner for Trade, Baroness (Cathy) Ashton, as High Representative for Foreign Affairs and Security Policy and Vice-President of the European Commission, are both, on the evidence, imaginative and sound.  Van Rompuy has a solid reputation for his skill in negotiating compromises and accommodations between the warring Flemish and Walloon communities in Belgium, exactly the skill required for steering the 27 egos of the European Council towards the compromises and accommodations that are essential if the Union is to speak with one voice on deeply controversial and divisive issues.  Moreover van Rompuy’s low-profile and unassuming manner is an asset if the 27 heads of state and government who comprise the Council are not to feel their status as elected national leaders threatened by a more flamboyant and assertive Chairman with ambitions to cut a figure on the world stage.  Cathy Ashton has won golden opinions, respect and even affection in Brussels and beyond during her year as EU Commissioner for Trade, one of the most demanding jobs in Europe.  The opportunities for identifiable personal triumphs in that role are naturally limited — much of the work is dismayingly technical and has to be conducted discreetly behind closed doors, and success often depends on the decisions of foreign governments over which the Commissioner has no control — but despite this she already, in just 14 months, has a respectable list of achievements to her name.  Her unprepared statement on her new appointment struck exactly the right note of firmness, efficiency and modesty.

But true to form, the UK media have excelled themselves in sneering dismissal of the two appointments.  Here is the Daily Mail:

The EU stitch-up: Low-profile Labour crony made foreign minister so fanatical Belgian federalist can be President

A Belgian federalist and a former chairwoman of Hertfordshire Health Authority were ushered into Europe’s two grandest jobs last night as it stumbled on to the world stage.

Even the generally pro-Europe Guardian could scarce forbear to sneer:

— shouted the lead story on the front page of the print edition, although interestingly the headline was changed in the online version to a more sober “Herman Van Rompuy and Lady Ashton chosen to lead EU“, no doubt amended when Alan Rusbridger choked on his cornflakes over the ‘great EU stitch-up’ headline.

There’s no mystery about these dreary media distortions.  Most of our print media are hysterically Europhobic, and incapable of printing anything positive or even straightforwardly factual about the EU.  For months they have been building up the notion that Tony Blair was in with a chance for European Council ‘President’, when anyone with an ounce of political nous knew very well that such an idea was beyond satire.  So the appointment of a Belgian with a funny name had to be represented as a snub to Britain, and Lady Ashton’s appointment as apologetic compensation.  Even worse, the fatuous idea that Blair might be appointed encouraged a gross misrepresentation of the job as “President of Europe”, misreading ‘President’ to imply an executive President, to be on a par with President Obama and the President of China, instead of the title of President being merely the French for ‘Chairman’.  Sweden, as current EU Presidency, circulated a paper to the Council before the appointments were discussed and agreed, designed to stress that the principal function of the President would be to chair, steer and manage the meetings of the European Council.  Clearly Tony Blair’s ambition was a good deal grander than that. 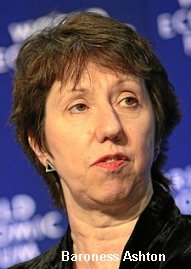 Two other distortions are worth noting.  Almost all UK media coverage has harped on the ‘obscurity’ of the two appointees, sneering that no-one had ever heard of them.  It’s of course true that neither van Rompuy nor Cathy Ashton are household names in Britain, or even probably elsewhere in Europe.  But this trumpeted obscurity is partly a function of the failure of the UK media to report day-to-day news of the EU or of individual continental European countries unless they either touch on some argument with Britain, or make the mainland Europeans concerned look ridiculous and therefore funny, or demonstrate the rottenness of the EU and the general incompetence of foreigners.  Van Rompuy after all has been prime minister of Belgium since 30 December 2008 at a time when a close European neighbour and host to the EU’s institutions has been passing through a major constitutional and political crisis; Lady Ashton has for more than a year occupied one of the most demanding and difficult positions in the whole EU with considerable flair and success, and was formerly a member of the UK Cabinet and Leader of the House of Lords who steered the controversial Lisbon Treaty through the House of Lords with conspicuous skill.  It’s true that she is a former Chair of Hertfordshire Health Authority: but then it’s not so long ago that Barack Obama was a community organiser in Chicago, a more obscure position than almost anything Lady Ashton has ever done.  Nor has Cathy Ashton’s work in UK politics gone unrecognised:  in 2005 she was voted “Minister of the Year” by the parliamentarians’ own house organ, The House Magazine, and “Peer of the Year” by Channel 4.  In 2006 she won the “Politician of the Year” award at the annual Stonewall Awards, awarded to those that have made a positive impact on the lives of British LGBT (Lesbian, Gay, Bisexual and Transgender) people.  (A wonder the Daily Mail hasn’t yet picked that one up as fodder for another sneer.)  In several of her UK ministerial jobs and especially as EU trade commissioner, she has acquired quite extensive experience of international negotiations, useful preparation for her new role.

But the other distortion is more significant.  The consultation process within the European Council leading up to the unanimous agreement on the two appointments has been widely denounced by our media as a ‘stitch-up’, seamy horse-trading, and worse.  Those proclaiming the greatest outrage over the process have tended to be the loudest opponents of so-called EU ‘federalism’, term misused to mean a propensity for the EU to turn itself into a single centralised supra-national super-state.  Some have even denounced the appointments as undemocratic because we, the people of Europe, were denied the opportunity to vote on who should hold these important posts.  Yet if there had been any question of holding Europe-wide elections to the posts of “President of Europe” and “Europe’s Foreign Minister” (to adopt the media’s nursery-language abbreviations) , that would unquestionably have prompted a storm of Europhobic invective at this new evidence of Britain being dragged unwillingly into a European super-state.  A European Council President (and to an only slightly lesser extent a High Representative for Foreign Affairs and Security Policy) with the unique authority derived from having been elected from right across Europe would have outshone the 27 nationally elected heads of state and government who at present exercise overall control of the Union’s affairs, and are responsible each to his or her national parliament and electorate for what they do.  Direct election to the Council Presidency would indeed have marked a decisive step towards a supra-national sovereign EU.  But our Europhobic newspaper proprietors and their obedient leader-writers had no qualms, apparently, about using even this as a stick with which to beat the leaders of our continent and the union of independent sovereign states to which we belong — just.

One feature of the appointment procedures which has attracted special opprobrium as constituting a ‘stitch-up’ was the agreement between the minority left-of-centre Social Democratic grouping in the EU and the right-of-centre Conservative grouping to which the German Chancellor and the French President both belong, and which has a majority in the European parliament, that the Council of Europe’s new President should be from the latter grouping and the new High Representative from the former.  Nothing wrong with that, in fact:  we don’t complain when the party with a majority in the house of commons insists that one of its own number should have the job of prime minister.  The idea that this understanding was designed to disqualify Blair, supposedly left-of-centre (don’t laugh), from the President job, is far-fetched:  Blair never even got to the starting blocks.  But it does highlight the utter folly of the British Conservatives in resigning from the majority right-of-centre grouping in Europe and forming instead a new grouping comprising a rag-bag of assorted misfits of the (mainly) far right.  (For more on this theme, and other aspects of it, see the informative post by Lavengro here.)

Tailpiece:  Returning for a moment to the richly comic Blair bid for “the Presidency of Europe” (not):  I described in an earlier post on this blog (here) my abortive attempt to persuade the Guardian to correct its erroneous descriptions of Mr Blair’s middle east job as “Middle East peace envoy” in one place and “UN envoy in the Middle East” in another, when in fact he is neither.  In its eventual, long-delayed reply, the Guardian admitted that “UN envoy” was wrong, but tried to argue that “peace envoy” was a defensible description, and accordingly declined to publish a correction.  In my response to this I cited conclusive evidence that the Quartet, which had appointed Blair, had been at pains to ensure that he was kept well away from the peace process, on which the United States took the lead.  Predictably, perhaps, the Guardian has ignored this;  anyway, by now it’s oldish hat.  But in the wildly improbable event of Blair having being taken seriously as a candidate for European Council  President, the extent and character of his middle east appointment could have assumed some significance.  I will put the evidence for the limited scope of Mr Blair’s middle east job in a further post on this blog soon.  Watch this space.

[1] For the avoidance of doubt, and in view of an anxious enquiry from an old friend, I apparently need to point out that my reference to the “funny names” that some foreigners have is a dig at the chauvinists of the Sun and other tabloids who entertain their readers by making jokes of foreign-sounding names, apparently unaware of how comical many of us (often including our names) seem to foreigners.