The bad-tempered outburst by the Conservative Chief Whip, Andrew Mitchell, against a policeman (or policewoman?) who wouldn’t open the gates to Downing Street to allow him to ride his bicycle through them, has predictably prompted a storm of criticism of Mr Mitchell and several acres of print gloating over what it reveals about Tories, toffs, chief whips and other undesirables.  Commenting earlier today on one of the more moderate pieces, on the website LabourList, I wrote:

I don’t disagree with anything [in that post], but I think it greatly exaggerates the significance of the whole thing.  This was an intrinsically trivial incident, which told us absolutely nothing that we didn’t already know about the attitudes of Tory (and indeed other) toffs to those whom they regard as the lower orders.  We don’t even know whether Mitchell used the word ‘pleb’:  indeed the whole script given (or sold?) to the Sun newspaper (presumably by the police or someone acting for them) reads very strangely, looking much more like a police approximation in imagined toff-ese than what a toff is actually likely to have said.  Clearly he swore, doesn’t deny it, and has apologised for it; and anyway ‘pleb’ is hardly the most insulting word in the language, especially as it so obviously says more about the speaker than the person spoken to.

The whole episode has been absurdly inflated by a number of those with an axe to grind:  the police, as a weapon in their war with the government over their pensions and police numbers, on which it’s by no means obvious that the government is in the wrong;  by the Sun, with an evident interest in keeping the story running for purposes of circulation, advertising revenue and kicking the toff class in their sensitive areas; and, I’m sorry to say, by the Labour party as an opportunistic and ungenerous stick to beat the Tories with.  Perhaps it’s too much to expect Yvette Cooper to have taken a more understanding and perhaps humorous line on the whole thing, which would have done her some credit; but to demand some kind of public inquiry, as the Labour party is now doing, seems to me absurd verging on despicable. 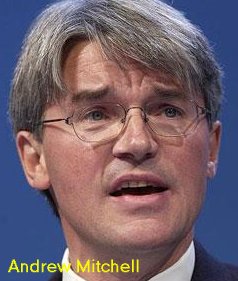 It’s worth remembering that Mitchell was a good, progressive and courageous International Development Secretary, who defended the policy of increasing overseas aid up to the UN target against howls of protest from his own more primitive colleagues and at a time when everything else was being savagely cut.  Moreover, it’s rather pleasant to reflect that any character defects revealed by the DowningStreetGate-gate incident seem certain to make him an extremely disagreeable and alarming chief whip in his dealings with Tory MPs:  so much the better.

Full disclosure:  for a year or two Andrew Mitchell and I were members of a small non-political committee which helped to promote debating and public speaking skills in schools and universities, etc., although he wasn’t very often there at its meetings.  I found him tough, very sharp, very practical, probably ruthless, always perfectly courteous — all ideal qualities for a chief whip.  He wouldn’t have been my first choice as a companion on a camping holiday, but then I’m sure that I wouldn’t have been his, either. It was obvious that we were at opposite ends of the political spectrum, and not temperamentally close.  I don’t instinctively urge that high-powered Tories should be given the benefit of the doubt when they commit the kind of crass blunders that real humans tend to do, but Mitchell’s bad-tempered outburst was not a hanging offence by any conceivable standard, and I think he should now be left alone and allowed to get on with his vital job of terrorising his fellow-Tory MPs.

I don’t expect this post to go down well here or on Labour List, but I’ve said what I think and I don’t plan to reply to hostile or other comments on this occasion, having rather a lot of things to do in the next few days in Real Life, as we call it.

PS: I’m reliably informed that Andrew Mitchell is not a member of the Cabinet. Apparently not many people know that — just as not many people seem to know that Nick Clegg didn’t apologise for breaking his pledge on student fees (he apologised for the pledge).