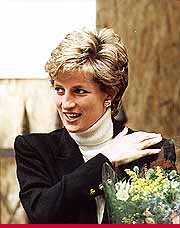 To the Palace Firm, a tiresome intermezzo,
Flash in the pan, she had no analogues.
Striding from car to gym, she flaunted legs
To die for, at flash-popping paparazzi.

Coy flirt, accomplished hater, playboy lover,
Timing her photocalls to meet hacks’ deadlines,
Dreading and needing their love, she made their headlines
On beach or yacht, in hospice. Now it’s over:

Dinner with Dodi – the Ritz, the car, the tunnel,
The pack of zooming lenses giving chase,
Motor-bikes, flashing, swerving much too close,
The howl of brakes, the cry of crumpled metal.

Surprised by grief, on this morning in September,
We can’t quite sum her up or absorb her going.
Extinguished, her flash-light’s still in some way glowing:
We’re still unsure of how to grieve, or remember.

Written on the day of Princess Diana’s funeral