Last night was an exciting time to be in New York.  Our younger daughter, L, voted in the morning for the first time in an American national election since becoming an American citizen:  there were no queues outside the polling station, and inside we watched the orderly line of voters patiently waiting for their turn to work the levers in the black-curtained voting booths.  Earlier in the day there had been queues stretching from the entrance to the polling station on E 67th street right up to Second Avenue and round the corner going up-town.  It was an unseasonably mild, sunny day:  a hopeful augury for the innumerable Obama supporters, saucer-sized Obama buttons and T-shirts everywhere, not a sign of McCainines.  But this was New York, not America.

In the evening L gave an election night party for an excited crowd of perhaps 30 or 40 friends and relations, ranging from teenagers to septuagenarians like J and me.  Obama faces, buttons, T-shirts, and posters filled the small Manhattan apartment.  Sixteen-year-old lads with guitars chatted to such affable household names as Gene Drucker, one of the two leaders of the fabulous Emerson Quartet, and his Blackberry-and-iPod-Touch-enabled wife Roberta. 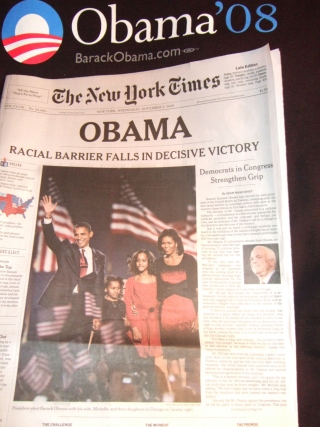 As the wine and beer and diet Coke flowed and heaped trays of food vanished down anxious throats, two television screens and the computer monitor delivered instant news of results beginning to trickle in.  We cheered when CNN, followed by the other main channels, projected an Obama victory in Pennsylvania, then soon afterwards in Ohio too.  Sighs of relief and rapid calculations:  a CNN poll analyst demonstrated on an interactive map that even on the most optimistic reckoning for McCain, he couldn’t now reach the magic 270 electoral college votes.  Then, on the dot of 11pm, the screen was filled with a new CNN projection:  OBAMA ELECTED PRESIDENT. We cheered and clapped and there were some tears.

We had to wait some 30 minutes or so for the McCain concession speech, a lot more graceful and generous than his campaign had been up to this moment of defeat.  Another few minutes’ wait, and almost on the stroke of midnight, Barack Obama, President-elect of the United States of America, led his wife and young daughters out onto the stage in a packed Grant Park in Chicago to wave to a crowd estimated at 125,000 people, cheering and waving back, laughing, smiling, weeping.  A momentary close-up showed the tears rolling down the cheeks of Jesse Jackson, somewhere in that vast crowd.  Obama had his serious look, head lifted in that slightly aloof magisterial way of his, but then his face lit up with his broad, happy grin:  he kissed Michelle, then each of his little girls, and went to the rostrum and microphone to acknowledge wave after wave of cheers from his happy adoring supporters.  Later there were clips of delirious crowds dancing and singing in the streets across the world from Sydney to — of course — Nairobi.

So there was welcome symbolism in the accident of the victory speech launching a new day, moments after midnight.  For us there was even more potent symbolism in that timing:  on the stroke of midnight our older granddaughter, L2, turned 18 and came of age; born in England to an American father and a British mother, just a few hours too late to be entitled to join her parents on that historic 4 November, 2008, in voting for the new President.  We drank champagne to celebrate the two happy events and I told the new adult that in four years’ time she would be voting to re-elect the President.  Enthusiasm and renewal and coming of age were in the air.

L’s partner D, the evening’s generous host and caterer, read my mind and offered me the use of his computer to record the evening’s historic (for once the accurate adjective) events for this blog.  I was tempted, but it was by now past 1am and I wanted a few hours to mull over it all.  On Lexington Avenue as we began to disperse to our hotels and apartments there were still some people celebrating, but moments later it began to rain.  Absit omen!

Reflecting this morning on a momentous night J and I were irresistibly reminded of another joyous election night, on May-Day, 1997, when another young fresh-faced leader, elected after years of destructive right-wing rule, came on national British television, kissed his wife and bade us welcome a new dawn for our country, as his supporters cheered and wept and waved and laughed.  Tony Blair’s message of optimism and change 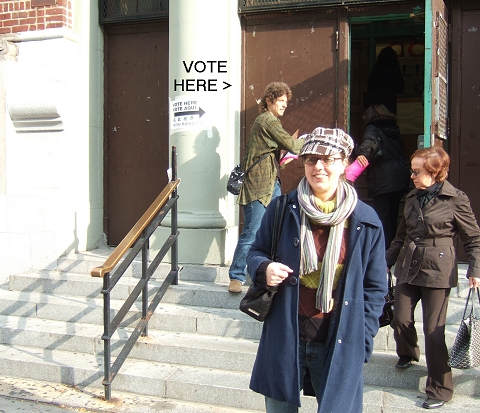 had also lifted our spirits.  The glorious early summer weather of election day had also seemed to confirm the start of a new age, and indeed for the first few years of the new government many cobwebs were swept away and wrongs remedied.  But the expectations that Blair and Brown had raised were impossible for any mere human or group of humans to satisfy over the long haul.  And the circumstances that they inherited were incomparably more manageable and malleable than those which will face President Barack Obama as he delivers his inaugural address to an expectant nation, to a passionately relieved and hopeful world, on 20 January, 2009.

The damage and wreckage of the George W Bush years will take years to clear up and repair:  two bloody and hopeless wars, a world economy in collapse, America in imminent danger of a new depression.  Yesterday millions of Americans voted for more of pretty much the same under John McCain, many of them convinced that Obama, not content with being black, was and is a ‘socialist’ (we should be so lucky!), a Muslim, a neophyte and a friend of terrorists.  Some will make the effort to accept the decisive verdict of democracy in action:  others won’t be able to do so.  We should keep reminding ourselves that if it had not been for the collapse of the American economy half-way into the election campaign and a suicidally inept and irresponsible choice by McCain of a running-mate, Obama might well have lost this election.  The Republican minority in the Senate will have ample opportunities to block or delay radical measures from the Obama White House.  Obama himself is already committed to expanding the unwinnable war in Afghanistan.  Above all, none of the extreme difficulties facing the new administration at home as well as abroad will be susceptible of quick fixes.  But the relief, joy and hopes of almost the whole of the rest of the world will be behind Obama, as he seeks to put flesh on the bones of his brilliant and pithy campaign slogan:  Yes, we can.