Royal wedding: does it matter? In some ways, yes

It was magnificent and on the day it went without a hitch.  Good luck to William and Kate, whose patent happiness together made a few million others happy too, a matter not to be sneezed at.  But some of the underlying politics were darker.

Like all such patriotic union-jack-waving occasions, hyped up by television and the press until one felt like being force-fed with clotted cream, this one will have given a boost to the government’s popularity almost as potent as if David Cameron had just liberated the Falklands.  There’s no logic in it, but there it is.  It’s a highly convenient time for the Tory-led coalition to get a boost, just as the evidence begins to come in that its ill-judged, self-defeating economic and fiscal policies are choking off growth and recovery, its doctrinaire plan for effectively privatising the National Health Service is beginning to fall apart, and the impetuous decision to commit British air and naval power, what’s left of it, to the defence of civilians in Benghazi has increasingly obviously landed us in gross mission creep and yet another military quagmire.  On top of that, the AV referendum is imposing genuine strains on the coalition’s marriage vows.  The royal wedding euphoria will help for a while to compensate for all these Westminster woes.

On the other hand, Martin Kettle in the Guardian makes a convincing case for the proposition that the Tories are full of self-confidence now that they’re back in the saddle, and that the royal wedding will have cemented in the feeling that life has returned to normal after the brief aberration of Labour government.  Cameron has succeeded beyond all rational expectations in capturing the centre ground from Labour, and clearly means to keep control of it by constant repetition of the myth that it was Labour’s failures which brought Britain almost to its knees, with the implication, both implicit and explicit, that Labour must never again be entrusted with responsibility for the economy, once Cameron and Osborne have completed their rescue of it (with a little help from their junior coalition partners).  Cameron’s other spectacular success — seducing the LibDems into the Tory embrace instead of having to rule as a minority government, vulnerable at any time to parliamentary defeat on controversial issues — further sidelines Labour by pushing into the far future any risk of a left-of-centre Labour-LibDem alliance against the Tories. The LibDems are now tarred with the Tory brush, perhaps irretrievably;  they are compelled to join the Tories in defending the Tory record, and (even more usefully from Cameron’s point of view) effectively prohibited by their membership of the coalition from advocating radical changes of policy at future elections that would mean disowning what they themselves have been doing in government.  Kettle reasons from this analysis that Labour’s only hope of regaining government may lie in the success of the AV referendum.  He urges Labour supporters to take the long view accordingly, and vote Yes to AV.  I’m not convinced by this argument, however.  AV would inevitably bring more votes and seats to the LibDems, making single-party government even more unlikely:  the LibDems, despite their present dire ratings in the polls and probably dire results in the elections on 5 May, would be overwhelmingly likely to hold the balance of power in any post-AV-election to the house of commons, with the ability to decide whether to hand the keys of No. 10 back to Cameron or to pass them over to Ed Miliband;  and after (probably) five years locked in marriage to the Tories, forced to accept responsibility for virtually everything the Tories will have done, a transfer of affection to Labour would seem much more unlikely than likely.  But Kettle’s arguments are certainly not to be lightly dismissed. 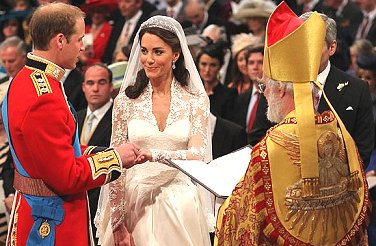 How does the Wedding come into all this?  Very consistently.  Not only is it a classically Conservative occasion, emphasising ceremonial, continuity, monarchy and triangular hierarchy, the supremacy of our social superiors:  not only does its success seem to redound to the credit of the government of the day, like winning a war or the World Cup:  but also the (surely deliberate) exclusion of any trace of a former Labour government from the spectacle reinforces the idea that Labour is discredited, exiled and irrelevant — in the sin-bin, off camera.  It’s naive to suppose that the spiteful denial of invitations to the wedding for Blair and Brown, so that only Tory former prime ministers (Thatcher and Major) were invited, was an oversight or a clerical error.  Martin Kettle sees in this, as in other aspects of the arrangements for the wedding, the anti-Labour hand of Prince Charles (“bad-tempered and self-pitying”, Michael White had called him earlier in the same issue; “reactionary” was Martin Kettle’s word for him) :  I’m more inclined to see the arrogant and vindictive hands of Cameron and Osborne in it.  Whoever was responsible, Martin Kettle’s harsh verdict is right:  the failure to correct these two glaring omissions “only confirms the miserable, petty, ill-advised disdainful nastiness of the original deed.”  Kettle sums it up:  “Not inviting Tony Blair and Gordon Brown to the royal wedding, while inviting Lady Thatcher and Sir John Major, is a cold, calculated act of high establishment spite against Labour.”

Another related point, less obvious:  we know that Ed Miliband was invited — he could hardly have been excluded, as leader of the opposition — and that he had accepted, promising to wear morning dress like the higher orders;  but I have yet to find anyone who had even the briefest glimpse of him in the television coverage, in the Abbey.  We saw plenty of Cameron and his sensible-looking wife, Ken Clarke (seemingly a non-singing member of the Abbey choir), Sir Elton John, royals galore (the lesser royals had arrived in a fleet of minibuses!) and of course those top celebs the Beckhams: but no sign of Ed.  Perhaps Mr Miliband was strategically seated behind a pillar. Labour has been shown the red card for allegedly fouling up the economy, and sent off.  Labour is simply invisible in the Tory game plan, and the scandalously partisan character of the wedding guest list was a singularly nasty part of it.

The extent of party political meddling in the guest list was amply confirmed by William Hague’s cowardly capitulation to media ignorance in ordering the withdrawal of the invitation to the hapless Syrian ambassador, casually ignoring the presence at the wedding of a host of ambassadors and assorted kings and sultans representing even more despotic and murderous régimes than Syria’s.  It’s obviously Rule 1 for  state occasions that you invite either all or none of the diplomats representing countries with which you have diplomatic relations, whatever you think of the human rights records of some of them.  The moment you start treating formal invitations to formal occasions as a reward for good behaviour, you’re deep in a morass of invidious, inconsistent and indefensible judgements.  The proffered excuse that this was not officially a state occasion is laughable:  if it was not a state occasion, why were the whole diplomatic corps (except the Syrian, himself only uninvited at the last moment) and a dozen foreign heads of state invited to the wedding?  This is an even more insulting excuse than the explanation for not inviting Blair and Brown that unlike Thatcher and Major, neither is a Knight of the Garter.  What kind of fools do they take us for?  As Simon Jenkins, gadfly Tory and former editor of The Times, put it with his usual incisiveness in another Guardian article, —

The global brain clearly has trouble dissociating the fascination of a happening from its significance, or otherwise. Confusion has certainly been sown by the wedding being attended, unwisely, by so many of the pseudo-trappings of statehood, such as the attendance of dotty foreign monarchs and dodgy ambassadors. This was bound to pollute a family occasion with political controversy, and so it has done. Whoever thought the occasion suitable to the diplomatic corps should be fired. William is not a serving monarch but a serving junior air force officer.

Simon Jenkins stresses in the same piece the essential triviality of the whole occasion, pouring scorn on the fantastic resources devoted to reporting it by, for example, the BBC, NBC (which he says  flew over its entire anchor team) and most of the print media.  The hours of time and acres of print devoted to speculation about the wedding dress, the bride’s hair style, and which units of the three armed services would be honoured by having their uniforms worn by the assorted princes who participated in starring or supporting roles — all these are indeed matters of the utmost insignificance.  But it’s right to pay attention to an event which obviously made millions of people happy, if only for a day; which unarguably demonstrates that for all the antics and follies of some of its members, the royal family continues to exercise an almost mystical hold over a large section of the population, anyway in England;  and which was expertly manipulated by an arrogant, cocksure and otherwise incompetent Conservative party leadership to promote the permanent banishment of Labour from the national scene.  You’ve got to hand it to the Tory toffs!