There’s been a lot of snow today in our corner of south-west London: around 6 or 7 inches (I still can’t quite come to grips with snow in centigrade) from the stuff that fell overnight last night, plus the stuff that has been falling all day; and more is forecast for this evening and tonight. There are a few pictures to flick through here. (Click the first one and then move through the rest using the arrows at the top.) I’ll put a specimen below as well.

Some snow pundit on the radio says that the UK record for snowfall remains 89 inches in County Durham in 1949. Be that as it may — and I for one don’t believe it — today’s modest blanket is both pretty unusual and faintly alarming. There are no buses running in London today, and very few trains or tubes (subway trains). As it happens, J. had a medical appointment up in north London in the early afternoon. Even if we had managed to struggle through the snow to the nearby railway station and had been lucky enough to get one of the very few trains stopping at it, followed by similar luck with a tube from Waterloo, there could well have been real problems over the return journey home, and being stranded in north London wouldn’t have been a lot of fun. (It’s been well below freezing all day.) Fortunately, or otherwise, the medic who had been due to see J. answered his mobile to say that he wouldn’t be able to get in today, so we’ll try again tomorrow, although there’s no evidence that it will be any better then.

We have lived, worked and driven assorted modest cars through far more sadistic winters overseas: two in Moscow, three in Warsaw, four in New York, one on the great lakes in Canada; so we still have the clothing, the shovels, the stiff long brushes, the de-icer fluids, and some familiarity with the varying uses in ice and snow of the reverse and second gear facilities of the modern car. We also know about the importance of grit. In Moscow just clearing the snow from the car and scraping the solid ice from the windscreen each morning, then digging out the snowdrifts immediately in front of the wheels, was a formidable task, and I was younger, fitter and leaner then. I used to go out into the great courtyard and car park of the foreigners’ ghetto at 1 or 2 in the morning, wearing six layers of heavy clothing and a fur hat, to start the engine of our humble Ford Cortina and run it for half an hour so as to improve our chances of getting it started in the morning and so get in to work. Often others who had not taken the same precaution would appeal for a tow-start when they heard the Cortina engine cough into life. I once towed a Saudi First Secretary for about four miles along the snow-drifting avenues of Moscow before he managed to get his huge American car started — and when it did, he very nearly drove it into the back of me.

Now there’s nothing like as much snow here in our Mews, it’s not nearly as cold, and the car starts at the first twist of the key in the morning without the need for a midnight warm-up. All the same, the effort required to clear the snow from on top of and in front of the car and to clear a track out into the exit road from the Mews has increased in proportion to my age and waist-line, and by the end of it I was uneasily remembering the statistics of old age pensioners, some a decade younger than me, dropping dead from heart attacks from similar exertions in English snow-storms. I seem to have survived, so far, to fight another day (tomorrow).  But the knowledge that the car on the ice-bound roads could well be the only way of getting to a doctor or a hospital Accident & Emergency department in case of a sudden medical problem affecting either of us is a little depressing. Luckily these things don’t generally last long in this country, courtesy of the Gulf Stream. But those old generalisations seem no longer to be operative now in the age of Global Warming. Roll on summer!  No doubt the unprecedented heat-waves will kill twice as many old age pensioners as the snow. 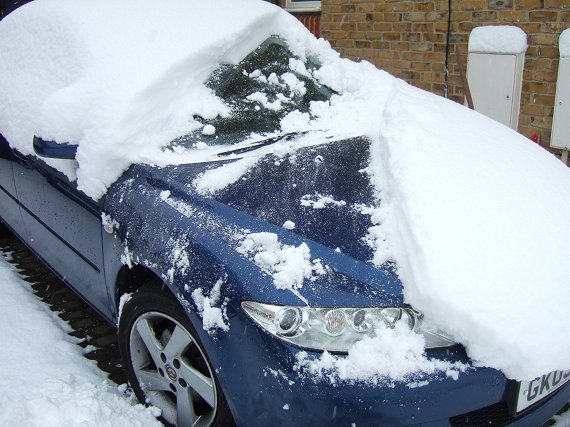