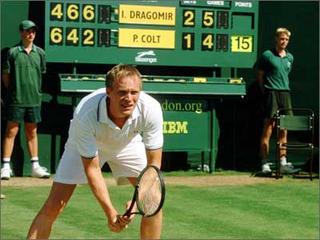 Wimbledon fortnight (two weeks, that means, you Yanks) is here again and all the Brits are out before the first weekend. Our flag-wagging tabloids — and some of the solemn papers too — have been plunged into grief by the defeat once again of our perennial white hope, Tim Henman, who went out in a storm of colourful language more reminiscent of McEnroe at his saltiest than of Henman the eternal public schoolboy with the short hair and the sententious sentiments about the defects of his game.

At almost the same moment the British media have been hysterically excited by the sudden epiphany of an 18-year-old Scot, Andy Murray, who unexpectedly won a couple of early rounds at this year’s Wimbledon, and even for a time seemed capable of winning a third, against a much higher-ranked player. The mass celebrations of this national (if ephemeral) triumph would have been appropriate for a major victory in a war for the country’s survival or the arrival of a team of British astronauts on the surface of Mars ahead of the Americans and the Russians. Still, Murray did play with much style; so much so that he has now aroused expectations for the future which a Titan of the game would be hard put to it to satisfy.

As we live only about half a mile away from the All England Lawn Tennis and Croquet Club (its actual name — founded in 1868) we do enjoy the privilege, throughout the Fortnight, of getting half-hourly highly localised weather forecasts, which partially makes up for the fact that we can’t park anywhere within a ten-mile radius of the centre court.

Incidentally, for the uninitiated, we’re talking about tennis. Not croquet.

Well, perhaps the Brits will be the first on Mars with their little digital cameras…