It’s a common experience that living for even a short time in certain indefinably special countries leaves a deep and ineradicable impression. Even a visit of a couple of weeks to those special cultures or landscapes may print itself in the memory more vividly and durably than months or years spent in other places which are on the face of it no less picturesque, exotic or complex. Those who know the subcontinent (especially perhaps India) at first hand often experience this sense of fascination with it and sometimes a lasting commitment to its people and their culture. China, perhaps Russia, perhaps Poland, can exercise the same pull. Other places will come to others’ minds.

For myself, as for many others who have spent time there, Ethiopia has this quality to an extraordinary degree. There is a freemasonry among old Ethiopian hands that has few parallels. This is especially true of those of us who were in that country during the famine years of the mid-1980s, not just because the images of famine experienced then are quite literally unforgettable, but also because involvement in the huge international famine relief effort of those days was for many of us the deepest experience of our lives: more demanding, more emotional, yet in some ways more rewarding than anything else we have done before or since. The sheer size of the disaster and of the scope for action to save those threatened by it was both humbling and energising: a million or more human beings dead, another 7 or 8 million in danger of death from starvation and disease – a completely different order of magnitude from even the horror of the 2004 tsunami, and far more prolonged. Those who have described the tsunami disaster as the worst human catastrophe in our lifetimes have short memories, or are not yet 20.

One consequence of that famine, filling the world’s television screens and newspaper front pages for nearly three years in the 1980s, has been to set up an almost indestructible association in the world’s mind between Ethiopia on the one hand, and on the other hand those unbearable images of pot-bellied starving children, flies crawling over their eyes, tiny bodies in the arms of dignified mourning mothers, grave and patient families waiting stoically outside the feeding centres in the knowledge that only the few who might still be saved could be let in.

All the more exasperating for those who now govern Ethiopia and represent her abroad that this automatic connection between Ethiopia and starvation is so durable, and yet so dated. Partly by the Ethiopians’ own exertions, partly with much (but not enough) international help for development, partly through the end of the internal and regional conflicts that have bedevilled famine relief and development alike, above all by the substitution of a broadly democratic régime for the murderous tyranny of the Mengistu gang – for all these reasons Ethiopia is now a different country. Of course there is still terrible poverty, drought can still threaten perilous shortages of food, and much remains to be done to enable a proud and strikingly talented people to enjoy even a fraction of the standard of living that we in the rich west take for granted. But for the most part those starving babies and mass graves are a thing of the past. 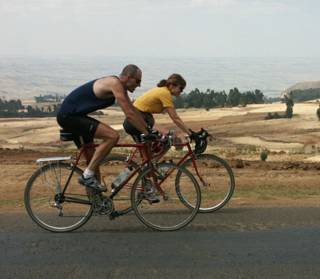 Owen & Grethe near Fiche in Ethiopia

around part of northern Ethiopia in 2002. The two cyclists, Owen and Grethe, write in their introduction: “It is fairly unusual to go on cycling holidays in Ethiopia [an understatement that’s hard to beat]. We planned our own route and made our own arrangements partly to give us flexibility to combine cycling and sightseeing.” The website includes masses of background information and advice for those contemplating a visit to Ethiopia (not necessarily in the saddle), with plenty of photographs taken during the expedition that do full justice to Ethiopia’s glorious scenery, beautiful and colourful people, and endless variety. It’s not necessary to have been there in the days of tragic famine and inspiring relief work, 20 years ago, to recognise in this new website the special pull of Ethiopia, its sensational landscapes, its handsome and capable people, and its extraordinary history. You need to go there, or to have been there, to taste the full sharp bitter-sweet flavour of the place. But you get a definite whiff of it from http://www.owen.org/cycling/ethiopia/ – written, photographed and produced, I should admit, by my own son Owen and Grethe, his Danish partner (and fellow runner and cyclist). To both of them I raise my hat.

PS: No more of these puffs for other Barders’ latest websites, anyway for the time being, I promise.