In celebration of Alan Sillitoe at 80

On 4 March 2008, next Tuesday, Alan Sillitoe will celebrate his 80th birthday, and tens of thousands of other people the world over should be celebrating it too.  Everyone remembers him for those early masterpieces, Saturday Night and Sunday Morning and The Loneliness of the Long Distance Runner, two works that changed the English fiction landscape for ever and whose film versions, with Alan's screenplays, are imprinted on the minds of everyone over 40 (and many younger too).  Alan Sillitoe has so far written (I calculate) 79 other books besides those two: more than one book for every year of his long life;  all published in the half-century from 1957 to 2007, this works out at just over one-and-a-half books a year, a truly Stakhanovite record — and the other good news is that he's still writing and seems set to continue writing for at least another half-century.  His versatility is also very remarkable:  the books include (in addition to the prolific fiction) autobiography, writings for children, plays, essays, poetry, screenplays, short stories, and travel. His bibliography on the Web is extraordinarily impressive.  Many of his books have (unsurprisingly) won literary awards. 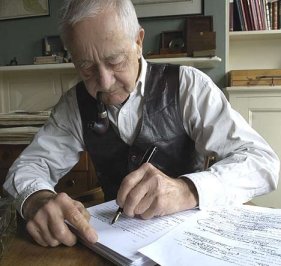 As this picture shows, Alan does most of his writing by hand, so it's the more remarkable that he is also an expert amateur radio ham, including a reader and tapper-out of Morse Code, as well as a devoted collector and connoisseur of maps, activities descended from his service in the RAF in Malaya.  He has lived at various times in various places in Europe and north Africa; now a Londoner, but still unalterably nourished by his Nottingham roots: how appropriate, then, that he is shortly to be made a Freeman of the City of Nottingham (which, I'm told, will give him the right to drive a flock of sheep through the centre of town). He's an undaunted but highly discriminating man of the left.  He has too a distinguished academic record:  Visiting Professor of English at Leicester de Montfort University (1994-7), Fellow of the Royal Society of Literature and of the Royal Geographical Society, and an Honorary Fellow of Manchester Polytechnic (1977).  He has been awarded honorary doctorates by Nottingham Polytechnic (1990), Nottingham University (1994) and De Montfort University (1998).

Meeting this sharp, observant but strikingly unassuming and friendly figure, you'd never guess that he's what the tabloids would call a legend in his own lifetime: a writer whose style is so deceptively clear and simple that you'd easily miss the artifice and skill that lies behind it.   A review of one of his books in the Guardian, published in 2004, gives an excellent impression of him.

Not least, he's the devoted and long-time husband of the distinguished poet Ruth Fainlight, of whom I'm proud to be a second cousin — as well as an admiring and affectionate friend of this amazingly productive and beautiful couple.

Happy birthday, Alan, and many more of them:  all, let's hope, still at an average rate of a book and a half a year!