The UN summit and the US amendments

In a cogent piece on his blog, Owen Barder has highlighted the mainly negative implications for international development aid policies and practices of the many amendments proposed, at the last moment, by the controversial new US ambassador to the United Nations, John Bolton, to the draft text that is to be presented for approval to the heads of state and government assembling at the UN in New York later this month (September 2005).

I agree, unsurprisingly, with Owen’s comments.   Moreover, in my view the Bolton amendments to the draft text (especially innumerable deletions) affecting policy on international peace and security and the use of force in international affairs are as important and as much a matter of concern as those affecting development, on which Owen naturally concentrates.   Many of John Bolton’s proposed amendments are extremely worrying as indicators of current US government policy; some are a weaselly way of declaring disengagement from important international law principles to which the US, like all other member states of the United Nations, is legally committed, but without formally coming clean by announcing the disengagements implied.  The sole superpower on the face of the globe should have the courage of its convictions and tell the rest of us how far it now intends to depart from the rules of international behaviour to which it is bound.

Here are some of the more revealing Bolton amendments affecting international peace and security and the use of force in international affairs:

55.  [Draft text:]  We also reaffirm that the provisions of the Charter of the United Nations regarding the use of force are sufficient [Bolton deletion:  to address the full range of security threats and agree that the use of force should be considered an instrument of last resort.  56. We recognise the need to continue discussing principles for the use of force, including those identified by the Secretary-General].

Non-proliferation Treaty:  Bolton deletion: three pillars: disarmament, non-proliferation, and the peaceful use of nuclear energy.  …  also appeal to the nuclear weapon states to take concrete steps towards nuclear disarmament with the objective of eliminating all such weapons… [etc]

Bolton deletion:  119.  We invite the permanent members of the Security Council to refrain from using the veto in cases of genocide, war crimes, ethnic cleansing and crimes against humanity.
120.  We support the implementation of the United Nations Action Plan to Prevent Genocide and the work of the Secretariat to this end.

Bolton deletion:  49.  We resolve to take concerted action, through such a system of collective security, based on the United Nations Charter and respect for international law, so as to prevent, mitigate and remove threats to international peace and security… [etc]

Bolton deletion of ‘and security’ after ‘peace’ and ‘collective security and’ before ‘well-being’ in para. 9

3. [Draft text:]  We … reaffirm our faith in the [United Nations] Organization and our commitment to the Principles and Purposes of the United Nations Charter, and the [sic] respect for international law [Bolton deletion: so as to maintain international peace and security].

Of course we know, from the actions of the United States in Kosovo — under Clinton, sadly — and (especially) in Iraq under George W Bush, that its government with its British ally no longer regards itself as bound by the rules governing the use of force by states against other states, and no longer in practice respects the role of the UN Security Council in granting or withholding authority for the use of force internationally, as laid down with exemplary clarity in the Charter.  Aided and abetted by Mr Blair, the Americans have made a half-hearted effort to foist on us a new ‘doctrine of humanitarian intervention’ which would open the flood-gates (to use a perhaps inappropriate metaphor at this time) to a deluge of self-interested attacks on the weak by the strong or stronger under the all-purpose excuse of forestalling or stopping a ‘humanitarian disaster’ such as genocide:  a convenient way to avoid the requirements and essential safeguards of the Charter. 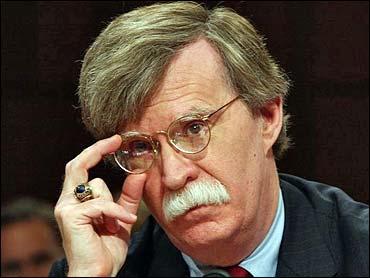 The draft text prepared for the approval of the heads of state and government meeting at the UN later this month includes a well thought out defence of the existing Charter provisions on the use of force.  It represents a brave attempt to rescue them from falling into abeyance or desuetude through being systematically ignored and undermined by an American regime which effectively claims the right to behave in whatever way it believes will serve narrow US interests, without regard to its international obligations or the effects of its actions on the carefully constructed framework of rules devised (by American jurists and statesmen among others) in San Francisco in 1945.  Mr Bolton’s amendments, including those cited above, need to be seen in this light.  Mr Bolton and his master (President Bush) and nominal mistress (Condoleezza Rice) will no doubt get their way over this text.  The world will be a more dangerous place as a result.