Last week I sent a letter about Indeterminate Sentences for Public Protection to the Sunday Times.  I wrote:

Prison Overcrowding and Indeterminate Sentences
You report that the Justice Minister is pressing the Home Secretary to help reduce the cost and overcrowding of our huge prison population by releasing or deporting more than 600 foreigners who have served their sentences but are still locked up (“Clarke seethes at cost of foreigners in British prisons”, September 19).  Similarly, more than four times as many prisoners (some 2,500) have served the “punishment” part of their Indeterminate Sentences for Public Protection (IPPs) but are still kept in jail indefinitely because of the inherent impossibility of proving that they won’t reoffend if released: and the number increases all the time. Releasing them forthwith, perhaps on licence, would remedy a grave injustice (especially if the whole pernicious IPP system were to be abolished at the same time) as well as saving a huge amount of taxpayers’ money and contributing significantly to the relief of the prison overcrowding that shames us all.
Brian Barder

I was glad that the Sunday Times duly published my letter — a version of it, anyway.  I can’t take a copy of the published version from the Sunday Times website, because Mr Murdoch has put it behind a paywall, and I’m not going to pay to see a newspaper website.  So here is a picture of my letter instead: 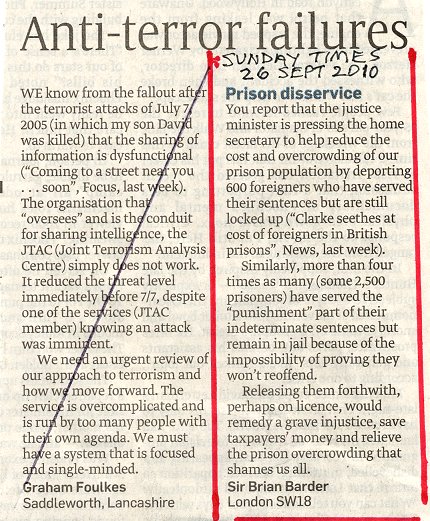 I doubt if one in a hundred of the readers of the Sunday Times will have had the foggiest idea what I was on about, and even fewer of those paying to read it online will have had any clearer an idea.  So I decided to put it here instead.

It’s puzzling that the great injustice of IPPs has attracted so little attention or concern, certainly compared with other scandals such as control orders, abuse of stop-and-search powers, prolonged imprisonment without charge or trial, and sweeping powers to intercept our private correspondence.  How many British people know that we run a system of preventive detention in this country, under which thousands of men (and a very few women) are incarcerated in harsh penal conditions, indefinitely, not as punishment for anything they have done but because a few men in suits are scared that they might commit offences if they are released?  It’s surprising that neither the English courts nor the European Court of Human Rights have so far declared this pernicious system to be in contravention of the European Convention on Human Rights.  Tom Bingham, thou shouldst be living (and still on the Bench) at this hour!

I have tried to make a tiny contribution to the effort to publicise the evils of IPPs by periodically posting pieces about them on my blog, such as here and here.  Some of these have attracted numerous ‘comments‘ from the families of people serving IPPs (almost as much victims of this cruel régime as the prisoners themselves) and from various experts in the field.  These exchanges of messages as blog comments have become a kind of clearing-house for advice and appeals by those most closely affected by IPPs. They make salutary reading by anyone who doubts the mental agony suffered by the wives, sisters and children of men who have been incarcerated for sometimes relatively minor offences, who have served the ‘punishment’ element of their sentences, but who can’t be released because they can’t prove that if released, they won’t offend again.  Many begin to fear that they will never, ever be released:  that they will grow old and die in prison, all for having had a tussle with a neighbour or some such offence.

Ministers at the Ministry of Justice have gone on record as recognising the injustice involved in IPPs.  All the major prison reform and civil liberties organisations have campaigned against them.  The Ministry is currently reviewing sentencing policy and will publish a green paper for discussion in November — just a few weeks’ time.  Is it too much to hope that the review will resist the temptation merely to recommend minor adjustments designed to make IPPs marginally less objectionable, and go instead for outright abolition of an inherently pernicious system?  If it does, what are the chances of even the most liberal of Conservative ministers facing down the hang-’em-and-flog-’em punishment freaks on the right wing of their party, and the screams of the tabloid hysterics, in order to sweep away this ugly legacy of a misguided Labour home secretary?

It’s a pity that my letter in the Sunday Times was so mangled that its point was largely lost.  Perhaps the responsible MoJ ministers might be shown this blog post by one of their Google-literate officials.  It might help a little to strengthen their resolve to defy the opposition of the know-nothing tendency, and to do what they already know urgently needs to be done.

Update, 12 Oct 2010:  I have put the following postscript on this post as now published in LabourList:

As a postscript to this post, I urge anyone interested to read the article in today’s Guardian at http://j.mp/cD6HbQ, reporting the forthcoming speech by no less an expert on prison policy than the president of the Prison Governors Association, who ‘will describe the situation of inmates serving a sentence of imprisonment for public protection (IPP) as “a blatant injustice”.’ Eoin McLennan-Murray will call for the “immediate release” of the 2,850 IPP prisoners ‘being held well beyond their “tariff point” – the minimum date after which the parole board can authorise their release.’ The Guardian notes that of the ‘6,130 serving indefinite IPP sentences, so far only 94 have been released.’
This is cast-iron evidence from the representative of those best placed to know what a ‘blatant injustice’ IPPs inflict on thousands of prisoners. All the penal reform and civil liberties organisations take the same view of IPPs. It’s really time to end this blot on our system of justice.