Tony Blair: is the strain beginning to tell?

Seven years in No. 10 Downing Street and two major wars: the grinning, boyish Tony Blair who entered No. 10 on that glad, confident morning in 1997, those double-handed hand-shakes with the adoring crowd, the high hopes — all that suddenly seems a very long time ago. The tired, haggard prime minister who came out into the press room to face the cameras and the hacks to record his congratulations to George W Bush, immediately after the US presidential election result had become known, could have been another person altogether: receding hair, lined face, grim expression, reading his prepared statement with a dying fall in every sentence, turning immediately to leave the room when he had finished it, ignoring the frantic interrogative shouts of the journalists. He looked much the same at his brief press conference in Washington with a President Bush who, for the first time, looked years younger than the British prime minister; 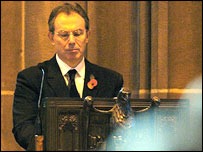 Tony Blair after the Washington visit

the only wan smile came at the end when he turned to urge Bush not to say ‘Yes’ after a journalist had asked the President whether he regarded Blair as his poodle.

Can it be that a political leader whose hallmark until now has been his phenomenal self-belief, the absence of any scintilla of doubt about the rightness of every decision he makes, whose every belief is “passionate”, whose values and morality are governed by his religious faith — can he have begun at last to ask himself what he has done? 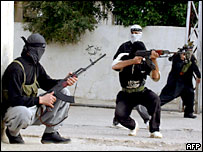 We that had loved him so, followed him, honoured him,
Lived in his mild and magnificent eye,
Learned his great language, caught his clear accents,
Made him our pattern to live and to die!
…
We shall march prospering, – not through his presence;
Songs may inspirit us, – not from his lyre;
Deeds will be done, – while he boasts his quiescence,
Still bidding crouch whom the rest bade aspire:
Blot out his name, then, record one lost soul more,
One task more declined, one more footpath untrod,
One more triumph for devils and sorrow for angels,
One wrong more to man, one more insult to God!
Life`s night begins: let him never come back to us!
There would be doubt, hesitation and pain,
Forced praise on our part – the glimmer of twilight,
Never glad confident morning again!