Next week’s Radio Times devotes the better part of 7 pages, including the cover, to a celebration of the 25th anniversary of The Secret Policeman’s Ball (SPB), a 1981 comedy revue in aid of Amnesty International. The event is also to be marked by a 75-minute television documentary to be broadcast next week on BBC4 and later on BBC2, and also by a 5-DVD boxed set of the SPB series running to more than 10 hours of footage. Ten hours!

The other evening my wife and I went to a preview at a London west end cinema of the documentary, preceded by introductory remarks of varying persuasiveness by sundry Personalities, including its producer and director, plus the admirable and eloquent Director of Amnesty UK, Kate Allen: and followed by an ‘all-star’ panel discussion and Q&A session comprising the same celebrities and, ‘in the flesh’ (as enthusiastically emphasised when he was introduced), Rowan Atkinson, whose career turned out to have been launched by the original SPB, on which occasion he ‘stole the show’ – most of the live part of the evening was conducted in this kind of luvvy language. The all-star panel Q&A was to be followed in turn by a screening of the film of the original SPB. I’m afraid that by that time my wife and I had had more than enough, so we made our excuses – as the saying goes – and left.

The SPB brought together three-quarters of the original Beyond the Fringe team (almost invariably sharp and funny), the Monty Pythons (very funny in a surreal way at their best, awful much of the rest of the time, as it may by now be permissible to admit), and assorted other comedians of diverse quality, of whom one of the best was undoubtedly Mr Atkinson, immortalised by Black Adder and some lesser programmes. Mr Atkinson proved a rather good panellist, drily puncturing some of the more inflated inanities of the other participants. He also commended himself to us by being resolutely and deliberately Not Funny. Some of the others seemed under the impression that they had personally presided over some immense and historic national triumph: winning the second world war, perhaps, or finding a solution to the problem of global warming.

Some of the contributors to the interviews in the Radio Times do give the impression of being in two minds about the nature of their achievement, viewing it as both rather amateurish and at the same time unarguably heroic. Michael Palin, for example:

‘[The director’s] style was very impressionistic, very rough and ready, so it all seemed rather underground – which, in our pretentious way, we thought we were. We loved the idea of being subversive: we were the guerrilla army of comedy!’

The guerrilla army of comedy!

And Alexei Sayle (one of the more uncompromising of comedians when at his biting and manic best), recalls discussing on camera with the director of the first three SPBs for the new documentary

‘how unsure we were as to the worth of what we were appearing in, and of the bombastic, celebrity-as-goodness-dispensing-god events such as Live Aid, Comic Relief and Children in Need, of which the [SPB] was the prototype. That part of our conversation was not used: films such as this like to tell a simple, happy story, and celebrity charity events are now above criticism.’ 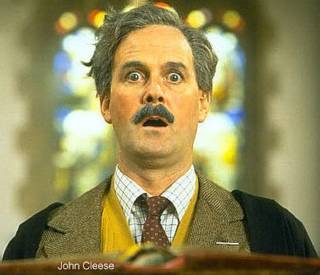 Eddie Izzard, from a later generation of comics, told the Radio Times:

‘Benefit gigs can be great for your career: people sit up and take notice of you in a way they won’t if you’re doing your regular show. All performers are aware that it’s not just for a good cause – it’s a good job to get.’

And the SPB director, Roger Graef, winds up the festival of disingenuous self-congratulation by asserting that

‘We achieved a lot – but, sadly, the issues Amnesty is concerned with are more urgent than ever. We were the first people to use comedy to address them.’

Still, Amnesty is incontestably an outstandingly good cause, so whatever you might think of some of these luvvies’ opinion of their place in history, please go out and buy those DVDs. You don’t have to watch them.