Like all the other UK television broadcasters, the BBC is notoriously miserly with its opera productions, even though much opera is so well suited to television (the indispensable subtitles come absolutely naturally and don't distract, and you're assured of the best possible views of the action, without that 6' 7" lady with the enormous hair in the seat in front).  BBC4 made handsome amends for this neglect of opera with this evening's transmission of Nicholas Hytner's current Glyndebourne production of Cosi Fan Tutte, surely the most beautiful, funny, touching and musically inspired of all Mozart's operas — which is really saying something.  For those of us who can't afford or contrive to get to Glyndebourne, this television version was an excellent second best, especially if you have a wide screen television set, stereo sound and decent speakers.

The open secret of a truly successful Cosi (apart from all the usual and obvious requirements, musical and theatrical) must be the credibility of the four lovers.  They have all got to be young, beautiful and above all sexy, or the whole thing falls flat.  Hytner's quartet passes this test triumphantly, with a pair of 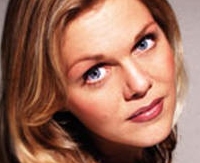 gorgeous sisters in the soprano Miah Persson (Fiordiligi, right) and mezzo-soprano Anke Vondung (Dorabella), and their suitably masculine boy-friends ("suitors" in opera-speak), tenor Ferrando (Topi Lehtipuu), and bass-baritone Guglielmo (Luca Pisaroni).  Their nationalities can all be deduced easily from their names:  Swedish, German, Finnish and Italian respectively.  All sing like angels, and look like Hollywood sex symbols.  They even act, too: Ms Persson, for example, possesses a splendidly authentic 21st-century giggle and impish laugh, and deploys both to irresistible effect.  How Mozart, entranced by women and their voices like no-one else (until Richard Strauss came along), would have loved it, if only he had had television or a ticket to Glyndebourne!

Wonderful playing by the Orchestra of the Age of Enlightenment, conducted by Ivan Fischer (Hungarian), and fine uncluttered sets, lit as through honey, top the whole thing off a treat.   This is the most glamorous and enjoyable production of Cosi that I have seen since a similarly good-looking production done on a shoestring on a tiny stage with only a huge double bed for a set and prop, by the Opera Company of ?ód? (Lodz) in Poland (pronounced like a badly slurred 'woods', as in 'woodge'), in a minuscule auditorium on the first floor of the museum, nearly 20 years ago in Polish communist days.  Like many of the singers in Polish opera and concert halls, the performers were young and attractive, with entrancing voices — just waiting to be snapped up after a year or two by enterprising western opera companies, but a splendid asset for Polish musical life in the meantime.

Just a pity that the BBC lacked the guts to put Cosi on either of its two terrestrial channels, where it might have won a few million converts to opera, if only because of those Swedish blonde and German brunette stars.  Instead, it went out on BBC4, a digital channel watched, I believe, by a couple of dozen viewers on a good night when there's no footie on elsewhere.  The way the Ashes are going at present in Brisbane (literally as well as metaphorically), viewers would happily have switched from cricket to Cosi with infinite relief, given the chance.