A Poem to Lenin

Phil Edwards, of the always highly readable blog ‘Existing Actually‘ (aka ‘Actually Existing’), posted on Christmas Eve an interesting piece about the use of ‘infantile’ as a term of political abuse, springing from Lenin’s gibe at ‘Left-Wing Communism’ as an ‘infantile disorder‘, thus triggering long dreary decades of ur-Marxist splinter groups slagging each other off in dog-eared and impenetrable jargon.  This evidently led Phil to dust off a poem written in his own salad days and never published until he quoted it in full last month in his ‘infantilism’ piece. 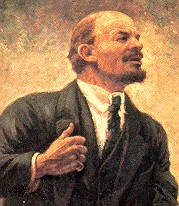 Tell me, Vladimir Ilyich: when you swam
Those bright days, history running fast about you;
When the paint was flaking, when last month’s posters
Flapped torn in the streets; when time resumed
And progress was stemmed; were you the only adult?

In an answer to comments on his post, Phil wrote that:

I’d write this one less flashily now, but I still rather like it.

I ‘rather like it’, too; indeed, it’s a striking piece of work, well worth reading in full and savouring, perhaps especially to be appreciated by those of us old enough to remember those gruesome Marxist polemics, all that bitter dissension among the comrades.  Where are they now?  Writing for the Spectator, I suppose.  Meanwhile Our Infant provides a foretaste of the exceptional literacy, both political and literary, which — if I may say so without sounding patronising — characterises Existing Actually.  (And Actually Existing.)