Why Wells?, I hear you cry.  Son O. directs one of the programmes at Development Initiatives, some of whose members are scattered around the globe and communicate with each other electronically, but which maintains an office just outside Wells, in Somerset, in southwest England, south and a little west of Bristol and Bath.  On his visits to England from Ethiopia, O. likes to visit the Wells office to see those of the team who are there, and while in Wells he stays at a hotel, the Swan, an ancient but well modernised hostelry (now Best Western) just opposite the glorious cathedral. 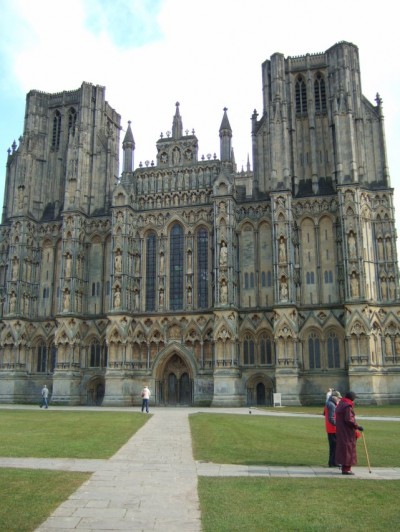 From the windows of the Swan’s bar and lounge one can watch the changing light on the intricate statues and carvings on the face of the cathedral as the sun moves round to bathe it in honey-coloured light.  In addition to its excellent facilities (including free high-speed internet access) and superb kitchens and attractive friendly non-deferential staff, the Swan offers a terrific out-of-season half-board package that we couldn’t resist.  J’s damaged leg needed a week off from standing at the kitchen sink and trudging round Sainsbury’s so a week at the Swan sounded like a good solution.  It was.

Various factors contributed to a memorably relaxed and enjoyable week:  dry, sunny weather, balm after the months of freezing rain;  the cathedral itself, dominating the tiny town as no other cathedral of our acquaintance dominates its host city;  excellent food and comfortable room in the Swan Hotel, its efficient staff, always ready to help;  indeed, the unfamiliar courtesy and helpfulness of the locals generally, people from a much older England.

Card-carrying and evangelical atheists both, we went to choral Evensong in the cathedral on the Sunday, our last day.  It was gorgeous.  Those wonderful cadences of the prose of the prayer book and the Authorised Version of the Bible!  And a richly comic sermon, delivered with a straight face, reproducing almost word for word long passages of the classic sermon by Alan Bennett in Beyond the Fringe.  The choir-girls (on this particular day the adult men and the young girls were rostered to sing; the adult women and the choirboys had the day off) were all fantastically pretty, ranging in age from, I suppose, 8 or 9 to about 14, cherubic in their choirboy ruffled collars and white surplices, whispering naughtily to each other in the more boring passages of prayers and sermon, giggling surreptitiously, exchanging sly grins, but immediately resuming their appropriately grave demeanours — and singing their hearts out, articulating superbly (I could easily lip-read the words) and looking like miniature angels.  Where do they find children like that?  I suppose that once outside the cathedral they’re outrageous St Trinian’s-style swearing substance abusers, like everyone else of their generation, but boy!  how they sang.

A visit to the Bishop’s Palace adjoining the cathedral, home of bishops of Bath and Wells since 1206, was of course obligatory and worth-while, not least for the loving portraits of and testimonials to the past occupants of the Bath and Wells bishop’s throne, many embroiled, some fatally, in epic quarrels with the temporal power of their day.  In 1539 Richard Whiting, the last Abbot of Glastonbury, and two cathedral colleagues, were tried 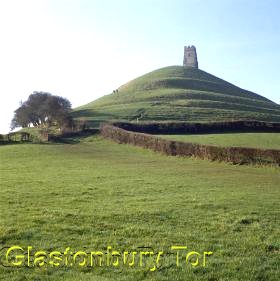 for treason in the Great Hall of the bishop’s palace at Wells, drawn through the town on hurdles to the dramatic summit of Glastonbury Tor just down the road, and there hung, drawn and quartered, or as we would say now, hanged, eviscerated and dismembered, martyrs to their faith.  What a spectacle that must have been.  More poetically, perhaps, a feature of the palace grounds is the wells, or springs, that give the town its name, pumping out more than 100 litres of water every second into the palace moat, the town water system and the nearby river.  The moat has long been home to swans (hence the name of our 15th century hotel), trained in recent times to ring a bell with their beaks to signal their desire to be fed.  Disappointingly, we learned that the last pair of swans had flown away some weeks previously.  One, the female, had allegedly returned briefly with a new toy-boy lover, but had left with him soon afterwards and not been seen since.  As far as we could see, they must have taken the bell with them.

Quite apart from the cathedral and the bishop’s palace, Wells is an architectural gem, a lovely place to wander round, all on a human scale.  The market, held twice weekly in, rather obviously, the Market Square in the shadow of the elegant Town Hall, is notably authentic, virtually tat-free, reflecting what appeared to us to be the dominantly middle-class character of the town:  good quality clothes, superior books, food ranging from the humdrum to the imaginatively exotic.  At one point as we wandered along the stalls a squad of eight young men dressed in Roman centurions’ uniforms (breast-plates and white mini-skirts with protective leather strips), carrying spears, led by a similarly dressed ‘officer’ barking commands at them (some at least in Latin: J distinctly heard ‘Sinister!’ to indicate a left turn), marched smartly out of the cathedral precincts through the archway into the square, paraded round the market, and eventually disappeared back through the archway into the precincts.  No-one thought it necessary to explain this phenomenon;  no-one collected money for it.  Just an old Wells tradition, we assumed, picturesque and harmless.  One or two fellow-tourists furtively took photographs of the legionaries.  No-one else seemed to take much notice of them.

And there are plenty of excellent pubs, some offering a wide range of well kept bitters from all around the south-west, together with good food.  Classy charity shops, too.  Wells has something for everyone.

Contrary to appearances, and unfortunately for me, I’m not being paid by the Wells tourist office (or anyone else) to write this.  And lovely though Wells is for a visit, a week is probably enough.  Those courteous, olde-worlde Wellsians have every right to be proud of their miniature cathedral city.  But, as at least two of my offspring observed, to live there would be BORING.

[More pictures of Wells are at http://bit.ly/azsacZ]

Postscript (22 March 2010): I can’t resist adding this response from an old friend:

I totally agree with your views on Wells and its cathedral – quite my favourite in this country. You didn’t mention the truly amazing interior with the huge stone X-shaped brace that prevents the collapse of the whole caboodle! Nor that extraordinary stone staircase, wending its way unevenly to the Chapter House. The imperfect and contingent reminding us (well, me) of the non-contingent!