Many commentators have apparently missed the point about Abu Qatada‘s successful appeal against deportation.  The Special Immigration Appeals Commission (SIAC) accepted the Jordanian government’s assurances that Qatada, if returned to Jordan for trial on old terrorism charges, would not be tortured and that the government, from the King down, would do everything possible to ensure him a fair trial.  The problem is over two statements, made years ago, which it’s generally agreed may well have been produced by torture.  These were used in evidence against Qatada when he was tried in Jordan and convicted in absentia, and are now in a sealed file of evidence used at the earlier trials.  If they had the power to prevent those tainted statements being used again when Qatada is re-tried after being deported to Jordan, the King and his government would clearly do so.  The SIAC judgment of 12 November (pdf) accepts that assurance: “with the significant qualification that all members of the executive government have made it clear to their British interlocutors that they cannot interfere in judicial decision-making“.  The SIAC judgement exhaustively analyses Jordanian law and judicial processes and comes to the definite conclusion that re-use of the two tainted statements at any future trial of Qatada is a real possibility.  This would not only contravene Qatada’s human rights under the European Convention (as the European Court has confirmed, Britain being a signatory to the Convention and hence legally bound by it) and under the UK Human Rights Act (as SIAC, a British court, has confirmed): it would also be in flagrant contravention of the UN Convention Against Torture, to which Britain and Jordan are both signatories.  It is up to those who shrilly denounce SIAC’s judgment to state the grounds on which they disagree with SIAC’s carefully argued conclusion that under current Jordanian law and practice there must be a real risk that the two statements will be used in evidence against Abu Qatada if and when he is re-tried in Jordan.

Most, if not all, of SIAC’s critics have also missed an important further point made almost at the outset of its judgment:

This is our open judgment on that appeal.  There is a closed judgment, in which we have set out our closed reasons for reaching the same conclusions as those set out in this judgment.

In other words, SIAC’s judgment that Qatada could not lawfully be deported to Jordan, because of the risk just described, was also reinforced by additional classified evidence which is too sensitive to be revealed publicly.  There has been much criticism of the provision whereby SIAC may hear secret (“closed”) evidence, not revealed to the appellant or his lawyers but heard in closed session at which the appellant’s interests are looked after by a special advocate, a barrister with the necessary security clearance.  This is not the place to debate the rights and wrongs of that procedure: the point is that SIAC had other, undisclosed grounds for reaching the conclusion it did, in addition to those in its lengthy published judgment.

Enough is enough. Put this terrorist on a plane and send him home and worry about the European Court afterwards.  There are times when we need to put the public interest in front of the European Court and this is one of them…  We should not be kow-towing to this Mickey Mouse European court. 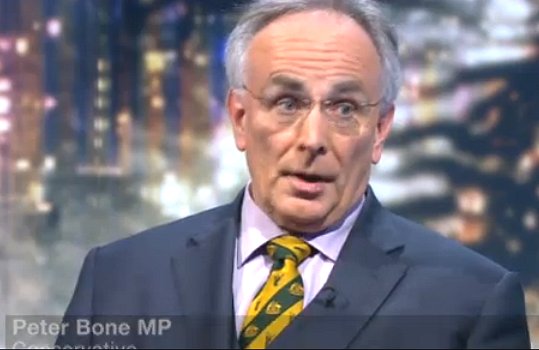 In vain Shami Chakrabarti of Liberty tried to explain to Mr Bone that he was calling on the government to disregard the finding of a British court, not just a European one.  Mr Bone wouldn’t have it.  A skim through Peter Bone’s voting record on civil rights issues in the house of commons shows that his public incitement to law-breaking last night and this morning was entirely in character.

Finally, where was the voice of Labour in defence of the European Court of Justice, the Human Rights Act and the Special Immigration Appeals Commission when the home secretary, Theresa May, performed her predictable whinge in parliament about the SIAC judgment yesterday?  Her Labour Shadow, Yvette Cooper, far from robustly defending the rule of law and respect for the fundamental rights of even the most unsavoury of the inhabitants of our country, instead outdid Theresa May in denouncing SIAC, the European Court, the home secretary’s record of attempting to deport Qatada, and the government’s action in “watering down” New Labour’s infamous Control Orders.  Ms Cooper demanded that Qatada be held in custody (contrary to SIAC’s decision) until he could be deported, if necessary under the government’s Control Orders Lite, despite the fact that he has never been charged with any offence in this country, still less convicted.  She twice recited the tabloids’ cliché about Qatada being allowed “on our streets”, as if this alone represented a threat to national security.  Once again Ed Miliband’s One Nation Labour follows Blair’s old, discredited New Labour, positioning a once great liberal party to the authoritarian populist right of one of the most reactionary Tory-led governments in modern British history.  If this represents the convictions of Labour’s front bench, they are in the wrong party.  The only other explanation is a tremulous fear that the tabloids and the Murdoch press (and their political adversaries) will accuse them of being ‘soft on crime’.  But cowardice is no excuse.  Time for some backbone, Ed, Yvette and Sadiq!