Buried inside the Sunday Times of 31 July 2005 is a report that while the Home Secretary, Charles Clarke, is away on holiday, the prime minister has given David Blunkett temporary responsibility for the Home Office — Blunkett, the most reactionary and aggressively anti-libertarian Home Secretary in living memory, out-doing even Michael Howard in his scorn for legal process and the judiciary;  Blunkett, the discredited politician with one of the messiest personal lives of our time!  (The Sunday Times report is made even more ominous by its assertion that "many in Whitehall believe Clarke is not up to the job of running the war on terror and are unimpressed by his performance in the aftermath of the July 7 bombings", which smells suspiciously like one of No. 10’s more egregious efforts at surreptitious, off-the-record briefings.)  With Blunkett’s Home Office re-appointment, however nominally temporary, Mr Blair pokes his thumb in the eye of those in his own party and outside it who care for our historic liberties: and, worse, he sends a surely deliberate signal about his determination to re-open his and Blunkett’s conflict with the senior judiciary in which they were routed last December by the judgements of Lord Bingham and his Law Lord colleagues, in which the judges declared the Blunkett régime of indefinite detention without trial incompatible with Britain’s obligations under the European Human Rights Convention and quashed the emergency order under which the government had sought to suspend some of its obligations under the Convention.

This seems the only possible interpretation, not just of the defiant restoration of Blunkett to the Home Office (or is it vice versa?), but also of Blair’s characteristically contorted remarks on the subject at his monthly press conference on 26 July:

“Question:  …in December I think it was – the Law Lords striking down the laws that David Blunkett had introduced, saying to us that the threat to our security came not from your warnings about terrorism but from the very laws that you were seeking to introduce. Have you got any guarantee that Parliament will pass laws, as you say you want to expel radical clerics, but is there any way you can ensure the judges take account of what we think is now public and parliamentary opinion, and that they will impose those laws, or that they will put the sort of strict interpretation of human rights above my right and everybody else in this room not to be blown up on the tube?
Prime Minister:  Well that is a good question. I mean the independence of the judiciary is a principle of our democracy and we have to uphold it. But I hope that recent events have created a situation where people can understand that it is important that we do protect ourselves and that in a sense if we can take measures to protect ourselves, it then becomes easier in a sense to protect our own way of life and our democracy and I doubt those words that you were quoting from one of those judgements would be uttered now, so I think the mood on this thing does change. But I will say to you because I feel this about the terrorism laws and you know we wanted to introduce laws before the Election on these issues, I say this in relation to some of the measures that I think we need to take in trying to get this fundamental and extreme ideology rooted out abroad, I feel that for several years we still have not woken up to what this thing is about …  I suppose really what I was also trying to say… is that if we are not careful we will get into the thought process that says it is our behaviour that should change: if we did something different, these people would react in a different way. I don’t believe that. I think this is a very, very extreme ideology, but it is an ideology. These are not isolated criminal acts and that is why I think when you look at the laws that we need, we need to take account of that in what we do … one way of making sure we keep together is to make sure that the laws that I think the country would regard as the minimum necessary are actually passed and are then upheld.”

By one of those weird coincidences beloved of playwrights and novelists, on the very same day Cherie Booth, QC, distinguished British civil rights barrister and in private life the wife of the prime minister, delivered in Malaysia an intricate and genuinely learned lecture about the role of the judges in democratic societies in the age of human rights and the threat of terrorism.  The lecture, whose full text is published on the Malaysian Bar’s website, deserves to be read in full, not least for its many telling quotations from the judgements of Lord Bingham and other judicial luminaries; the shrill cries of mock horror at her supposed marital infidelity heard from the Tory press are models of misleadingly selective quotation and interpretation.  At the risk of committing the same offence myself, I offer my own selective quotations:

“Nothing I say here could possibly be construed as making light of those horrible acts of violence, or of the responsibility imposed on the UK and other governments to keep the public safe, or of the difficult and dangerous task performed by the police and intelligence services…  at the same time it is all too easy for us to respond to such terror in a way which undermines commitment to our most deeply held values and convictions and which cheapens our right to call ourselves a civilised nation.  …  Independent judges providing purposive interpretations of their country’s most fundamental rights are an important component of any true democracy. As judges embark on constitutional interpretation they are afforded the chance to narrate the values that underpin the very essence of our humanity. This is not only a democratic role played by courts that act as guardians of the weakest, poorest, and most marginalised members of society against the hurly-burly of majoritarian politics. It is also a chance for judges to play a vital role as teachers in a national seminar on the topic of meaningful, inclusive democracy in the twenty-first century. In this role, the rhetorical possibility exists for judgments to draw upon relevant comparative and international rights experience to paint enriched and enriching tapestries of our common human rights and international law commitments.  We live in challenging times. Our institutions are under threat; our commitments to our deepest values are under pressure; our acceptance of difference and others is at a low point. It is at this time that our understanding of the importance of judges in a human rights age should be at its clearest. And it is at this time that our support for the difficult task that judges have to perform must be at its highest.”

The two texts are not, strictly speaking, irreconcilable. But they obviously reflect a sharp difference of emphasis.  Let’s hope that the three Cs (Cherie and Charles Clarke, if he’s allowed to get his job back from his disastrous predecessor) prevail over the two Bs (Blunkett and Blair T).  And three cheers for a gutsy barrister who’s clearly not going to be intimidated by the more vindictive of the media into forgoing her right, as a private and unelected citizen and a responsible senior lawyer, to freedom of speech, come what may. 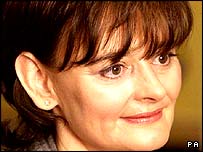