Cartoon history of the Labour Party

Alan Mumford, management training guru and latterly indefatigable publisher of books of political cartoons, has produced his best collection yet:  "Did Cowards Flinch?  A cartoon history of the Labour Party", with a foreword by Neil Kinnock.  As Lord Kinnock writes in his 2-page + foreword,

This book is an illuminating political history provided in the form of an art gallery.  Some of the work will have made even the most courageous flinch and wince some of the time.

Professor Mumford prefaces each chapter, covering a different period from 1900-1917 to 1993-2006, with a page or two setting the political context of the cartoons that follow, and each cartoon has a full explanatory caption — very necessary, since even the oldest readers and most dedicated Labourites will be hard put to it to identify some of the subjects of the earlier cartoons reproduced.  The cartoonists represented include everyone's favourites: Low, Vicky, Peter Brookes, Steve Bell (of course), Martin Rowson  (of course), Cummings, Jak, Trog, Illingworth, and many more.

I declare an interest (personal, not financial): Alan Mumford is among my oldest friends, going back to historic protests against the Suez disaster in 1956 and even earlier than that.  There are few people better equipped by an encyclopaedic knowledge of cartoons and by an equally comprehensive knowledge of contemporary political history, viewed from a discerning but recognisably Labour perspective, to produce a splendid book like this:  big and colourful enough for the coffee table but with enough solid reading in it for the bedside.  It's not too late to give away a few dozen copies as perfect Christmas presents.  Hardback, a snip at £19.99 (no, that doesn't fool me, either), from The Political Cartoon Gallery, 32 Store Street, London WC1E 7BS, by telephone to +44 [0]20 7580 1114, or by e-mail to info@politicalcartoon.co.uk.  You can also visit a splendid exhibition of many of the cartoons in Alan's book, and bearing the same name,  at the Political Cartoon Gallery, (still) at 32 Store Street, London, UK, WC1E 7BS, open from 9.30am to 5.30pm Monday to Friday and 11.30am to 5.30pm on Saturday.  Call 020 7580 1114 for further details.  But better hurry: the exhibition closes on Christmas eve.  And don't forget to buy the book!

One word of warning: apart from the magnificent front cover (see below, and don't on any account miss the present Leader in it), all the cartoons are in black and white.  I suppose the great majority of them were only ever drawn and published in B&W, and to have reproduced a handful of more recent ones in colour would probably have doubled the price of the book, so don't let's complain. 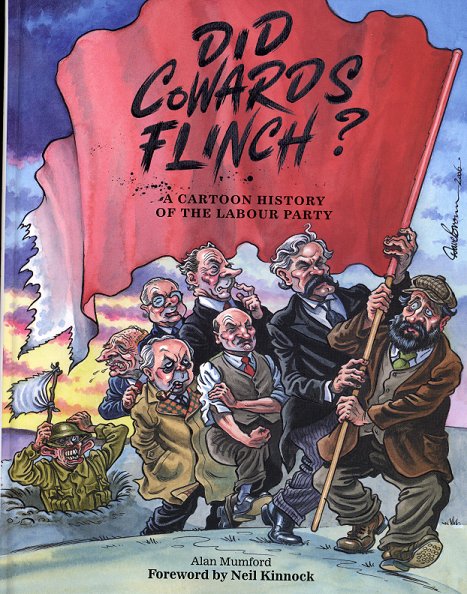