Club class for a prince? I wonder

According to the enormous coverage throughout the UK media of what the Prince of Wales wrote in his diary about his trip to Hong Kong for the handover of the former British colony to China (against the wishes of most of its inhabitants for whose freedom and welfare we had until then been responsible, but that’s another issue for another day),  —

“SUCH IS THE end of empire”, sighed the Prince of Wales, upon
discovering that instead of the first class legroom he was used to on
long-haul flights, he would have to squeeze into a mere club class
seat. “It puzzled me as to why the seat seemed so uncomfortable.” One
can only imagine the puzzlement of the royal bottom on its first
encounter with second-class airline seating. [Ben  MacIntyre, the Times, 24 Feb 06]

The prince’s discomfort, and discomfiture, were aggravated, according to the diary, by the realisation that while he and his staff were roughing it in the upstairs cabin of the Boeing, belatedly revealed to HRH as the location of the aircraft’s Club Class, the British politicians and the departing Governor were directly underneath in First Class.

A much likelier explanation of the seating arrangements, though, is that the upstairs cabin, usually indeed allocated to Club Class passengers, had been reconfigured and reserved in its entirety for the Prince of Wales and his staff, in order to provide them with privacy — and to relieve them of any obligation to make polite or even rude conversation with the politicians and 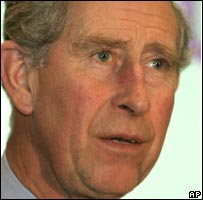 officials down below.  Older readers may remember the time when the whole of the upper cabin of the old two-storey Boeings used to be the ‘First Class lounge’ for First Class passengers, who could wander upstairs for a respite from all that ‘free’ caviare and champagne to enjoy a quiet read and a proper drink in the upper lounge, with its copious bar, miniature library of books and magazines, comfortable leather arm-chairs and easy tables, and easy access to the pilots in their cockpit, enabling the flying gentry to imagine, as they dozed off with a large Scotch and their feet up, that they were back in their gentlemen’s clubs in St James’s (although where the First Class ladies imagined themselves to be, I can’t imagine:  in the University Women’s Club, perhaps).  Was the heir to the throne really condemned to an ‘uncomfortable’ club class seat in a series of rows barely more roomy than the serried ranks of battery-hen humans back below in Economy, lunch trays pressed agonisingly into abdomens or knees pressed agonisingly into chests?   I rather doubt it.

But even if he was, to equate the Prince of Wales’s seating arrangements with the ‘end of empire’ does seem to be over-egging it a little.

Incidentally, this seems to have been no ordinary diary or private journal: more a newsletter, according to the prince’s former private secretary Mark Bolland, quoted by the BBC:

Mr Bolland said the journals were photocopied by a
secretary and sent out to an array of the prince’s acquaintances,
including politicians, "media people", journalists, actors and friends,
as a "bit of fun".  The former aide said he would be astonished if a
comprehensive list of the recipients had been kept, but he thought 50
to 75 people would have received journal extracts, which he said were
not treated in the same manner as confidential documents.

But we can all, surely, enjoy the minor witticism in the title given by the prince to his essay on the Hong Kong trip: ‘The Handover of Hong Kong – or The Great Chinese Takeaway’.  We may not always agree wholeheartedly with all the often eccentric views of our future king, but I do find an uneasy resonance in his evident distaste for the Great Chinese Takeaway, with its unmistakable whiff of betrayal.  He must get it right some of the time.