Damning a dancer for her politics

I'm saddened by the ugly noises emitted by the bloggers, writers of letters to the newspapers and contributors to phone-in programmes who are denouncing the English National Ballet (ENB) for employing as one of their 'principal dancers' Simone Clarke who, it has emerged, is a member of the far-right anti-immigration British National Party, and 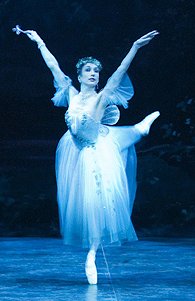 demanding that the ENB dismiss her.  Fanatical witch-hunters actually bought seats for one (or more?) of her performances in order to hiss and boo her — for her political views, not for the quality of her dancing, generally regarded as delectable.  This in turn has prompted the nasty bovver-boys from the BNP to stage demonstrations in her support outside the theatre where she has been performing, with counter-demonstrations by the witch-hunters.

Persecuting an artist, or indeed anyone else, by seeking to get her or him sacked from a legitimate job because of her or his political views or membership of a legal political party, however obnoxious its policies and attitudes, is despicable.  Attacking an organisation (whether the English National Ballet or any other) because it employs someone whose politics are objectionable, and trying to pressure it into sacking the person concerned because of the person's poilitical views, is even worse:  it's a 5-carat copy of McCarthyism —  the wicked old Senator from Wisconsin indeed used very similar tactics.  Ms Clarke's politics are her own business.  Campaign against the BNP, by all means, but leave Simone and the ENB to get on with the dancing. Start to force employers to investigate the political views and affiliations of their workers, with a view to sacking those not judged correct, and who shall 'scape whipping?

Tim Worstall does a characteristically vigorous hatchet job on the witch-hunters in an uncompromising blog post here.  In contrast, here's a particularly emetic example of persecution mania from a public official who should know better:

Lee Jasper, equalities director for the mayor of London and chairman of the National Assembly Against Racism, said: "The ENB must seriously consider whether having such a vociferous member of an avowedly racist party in such a prominent role is compatible with the ethics of its organisation. I seriously doubt that it is and that should lead to her position being immediately reviewed. I think she should be sacked." He called on funders and David Lammy, the arts minister, to intervene.  (Guardian report, 1 January 2007)

This whole noxious campaign is a grim reminder of the self-righteous, bully-boy streak that runs through so much of the anti-racism industry and too many of its fellow-travellers.  The fact that the ENB gets a subsidy from public funds (like most other ballet and opera companies) is completely irrelevant: the subsidy supports ballet, not the BNP, and to pretend otherwise is political illiteracy — or worse.  There's more than a whiff of real live fascism in the air, and it's not coming from a politically misguided but artistically talented ballet dancer.  You don't have to sympathise with the diluted, down-market fascism of the BNP, or share its racist proclivities, to be disgusted by this display of contempt for the vital principle of freedom of speech and opinion.  If that principle is thrown out with the BNP bath-water, and vanishes down the drain along with all the other fundamental liberties under attack from our illiberal government, we are all going to be in serious trouble — and the first to suffer will be those who can't endure the idea of a beautiful dancer with stupid political ideas.