Last week the admirable US television and radio program Democracy Now broadcast its 1-hour weekday shows, comprising news and interviews or discussions on civil rights and war-and-peace issues, from a small rented studio in London (London, England) instead of from its usual home in New York.  The second half of the program on Thursday (9 March 06) was devoted to a discussion of civil rights in Britain in which I took part along with the splendid Shami Chakrabarti, Director of the UK civil rights organisation Liberty, and Milan Rai, founding member of Voices in the Wilderness, an organisation opposed to economic sanctions on Iraq, currently coordinating the group Justice Not Vengeance.   Milan Rai is the first to be charged with “organizing an unauthorized demonstration” under the Serious Organized Crime and Police Act after his arrest at an anti-war demonstration in London last year as he and a colleague read out the names of British soldiers killed in Iraq, and he is bracing himself for a possible prison sentence at his imminent trial.

You can hear (but not watch) our discussion here:  it begins about 33 minutes into the 1-hour programme.  The discussion is chaired by the presenter and presiding genius of Democracy Now, 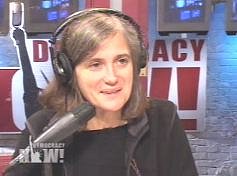 Amy Goodman.  Amy is very amiable (bad pun) and simultaneously extremely professional (as she should be, considering her long and distinguished experience).  We had no discussion at all before we started doing the programme so I was impressed by how much they knew about me, including not only the background to my resignation from SIAC but also that I was one of the 52 signatories of the open letter to Blair attacking UK and US middle east policies and the author of an article in the Guardian in October 2004 about the use in evidence of information got by torture. The programme’s small cadre of researchers had obviously done their stuff, more than can sometimes be said of much better resourced programmes on major British networks.  I was also impressed by Amy Goodman’s excellent short, ‘open’ questions, giving lots of scope to say what I wanted, unlike the long rambling ‘closed’ or leading questions by people like James Naughtie of the Today programme on BBC radio 4 which can generally be answered ‘yes’ or ‘no’, thereby revealing nothing at all about the views of the interviewee, but plenty about those of the interviewer.   Shami Chakrabarti commented on this to me as we were leaving.  (She is so telegenic and articulate and hyper-intelligent that I was in two minds about whether it was a good idea being on the programme with her.)

It was interesting to be talking about the erosion of our civil liberties in Britain for a television and radio audience in the United States and Canada: also slightly inhibiting, as one couldn’t assume as much background knowledge of the situation here as one does, possibly mistakenly, in talking to fellow-Brits, but also because it’s surprisingly uncomfortable criticising one’s own country, or at any rate its government, to foreigners.  So I was glad to be able to squeeze in, at the very end of the programme, after being warned by Ms Goodman that we only had 5 seconds left, two small but important points:  one, that however bad the deterioration in the civil liberties situation in Britain, it was still nothing like as bad as that in the US and places for which the US was responsible such as Guantanamo and Abu Ghraib;  and secondly, that the 7/7 London bombings on the London tubes by Islamist extremists had not been nearly as traumatic for us as 9/11 had been for the Americans, not just because many fewer people had been killed or injured here, but also mainly because we in Britain have much longer experience of terrorist attacks (anarchists, the IRA, etc.) than the Americans.  I might have added, if time had permitted, that we are probably a good deal more phlegmatic about such things than the majority of Americans appear to be, although whether that is a compliment or a criticism of us (or them) is moot.  According to an interesting article in the week-end issue of the Financial Times (11-12 March 06) by Edward Luce, —

In some respects the Democrats are now as guilty of stoking fears on national security as the Republicans. Their logic is impeccable. A majority of Americans believe there will be another large terrorist attack on American soil. Such is the depth of anxiety that one-fifth or more of Americans believe they will personally be victims of a future terrorist attack. This number has not budged in the last four and a half years.

It would be interesting to know the corresponding figures for Britain.