At last night’s contest between candidates for the British entry in the 2006 Eurovision Song Contest, kitsch show of the year, the winner — chosen, apparently, by popular vote throughout the kingdom — was a "rap dance track Teenage Life" led by a dancer and rapper with the slightly soapy name of Daz Sampson, who, according to the BBC website report, —

has scored a number of dance hits with Blue Bus and Uniting Nations, whose song Out Of Touch made the top 10 in 2004 and was also a hit in many other European countries.  … In his Eurovision entry, Sampson raps over a school choir type backing from a group of female singers. He co-wrote Teenage Life with his long-term [sic] collaborator John Matthews. 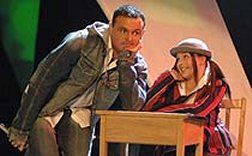 The setting purports to be a school classroom with Mr Sampson’s female backing group, dressed as schoolgirls in gym-slips and school blazers, writhing suggestively at school desks.  Daz, presumably in the role of their middle-aged school teacher, leers at the schoolgirls while droning an unintelligible lyric.  The ‘schoolgirls’ leer back.  At a time when the entire nation is apparently in the grip of a paedophilia panic, it’s hard to imagine anything more embarrassing — or perhaps more appropriate as Britain’s entry.  It should certainly offer a delicious target for Terry Wogan’s world-weary irony on the night.

Few seem to be betting the farm on ‘Teenage Life’ emerging as the Song Contest winner in Athens on 18 and 20 May (don’t ask me why it takes place on two nights: one would seem quite enough).  According to a member of something called ‘Team Eurovision’ (slightly dated inverted title, one might think) on the Eurovision blog, —

Here at Team Eurovision, we can’t say we’re entirely surprised by the result.  OK, so the song veers dangerously close to a novelty record, but it was certainly a lot more fun to watch than any of the other contenders on tonight’s show, and as we’ve been saying for the past few weeks, offers countless opportunities for some visual fun on the big night (in this case, it appears to involve backing singers dressed as schoolgirls sitting at classroom desks).  It’s true that the UK is taking a gamble with this one. It’s the kind of entry that could either win or score us another resounding nul points. But given our recent track record, we really have nothing to lose from taking a bit of a risk with our song. After all, we can’t do any worse than we did in 2003 …