The jackals of the media, drawn by the intoxicating scent of blood, are circling Gordon Brown, who looks and sounds increasingly like a wounded bull.  The polls, some of them manipulated by clever wording of the questions asked, are dire for Labour.  The commentariat, as always thinking, writing and talking in the clichés of current fashion, recite mantras involving a tipping point, a turning point, and a point of no return.  At Prime Minister's Questions in the house of commons, David Cameron dances gleefully around the glowering  prime minister and plants a series of banderillas in his back.  Labour back-benchers are reportedly in a depression verging on panic.  Today's Sunday newspapers and television tell us that in response to all this gloom, Brown has vowed to expand his little clique of close confidants and advisers (Alexander, Balls, Ed Miliband) — but only to include in future Geoff Hoon and Jack Straw, not a pair likely to inspire confidence in better things to come.

It's important to distinguish  between the disasters which the government has brought upon itself and those which result from sheer bad luck;  and between current criticisms of its performance which are justified and those which miss the point.

Gordon Brown clearly erred in allowing speculation about an early election, encouraged by some of his closest allies, to continue for so long when he could and should have scotched it much earlier than he did.  I'm inclined to believe him when he says that he was strongly disinclined to call an election soon after taking office, even when the polls were strongly favourable, although most people scoff at this and assume that he changed his mind when the polls went bad on him, calling him a hypocrite for not admitting the fact.  Either way it was a tactical error to allow everyone to expect an election even after he had decided against it.  Perhaps it seemed a good idea at the time to panic the Tories into premature revelation of their unfinished policies by holding over them the threat of an early election:  if so, it misfired badly when Brown announced that there'd be no election until 2009 at the earliest, making him seem both deceitful and indecisive.  But these were relatively minor errors which would by now have been forgotten had they not been followed by much greater problems.

The government can't, I think, be blamed either for the crisis that engulfed Northern Rock, the north of England bank that ran out of credit and had to be bailed out by Bank of England loans and guarantees in order to head off a general crisis in the whole banking system, or for their handling of it so far.  Northern Rock wasn't by any means the only previously reputable bank that succumbed to the temptation to make a quick buck from the American sub-prime mortgage market and the derivatives put together from it.  The collapse of this market exposed poor judgement on the part of numerous American and British banks and financial institutions, but not on the part of government.  Legitimate questions can be asked about the efficiency of the tripartite system of banking supervision and regulation constructed by Gordon Brown  as Chancellor of the Exchequer, but it's as yet far from clear that the system itself was at fault as distinct from some of the individuals operating it.  None of the current critics of the system seem to have found any fault with it before the Northern Rock débacle.  Those who welcomed Bank of England independence, Gordon Brown's coup de théatre immediately on becoming Chancellor in 1997, are being inconsistent in trying to put the blame now for any failures of supervision on the government which had plainly transferred the relevant responsibilities to the Bank of England (and the Financial Services Authority), leaving only a limited residue of control to the Treasury.  Nor has anyone so far been able to suggest a convincing alternative method of handling the crisis to that adopted by Alistair Darling, Brown's successor as Chancellor.  The worst possible verdict on the government's record here must be 'not proven'.

The greatest disaster to hit the government (so far!) has been the loss of the personal records, including banking details, of around half of the population when HM Revenue and Customs department (HMRC) put its whole child benefit database on two compact disks and sent them by the government's internal courier service addressed to the National Audit Office (NAO) — which never received them.  This has exposed a series of alarming malpractices, although only one of them — entrusting the disks to what is widely and inaccurately referred to as "the post", as if they had been dropped into a letter-box — has caught the attention of most of the commentariat.  These malpractices can be briefly listed. (1)  It's far from clear that the NAO should have been among those allowed access to this sensitive database or why they needed to see it in order to 'audit' the performance of HMRC.  The range of authorities with access to sensitive government databases needs to be radically pruned.  (2) The NAO asked for only some of the information on the database, explicitly excluding the bank details of individuals.  HMRC responded that it would be too expensive to strip out the bank details and other parts of the database not requested by the NAO, and that they would therefore send the whole thing.  But it's a key feature of privacy laws that those allowed to access government databases should be allowed to see only the information strictly relevant to their own duties:  and this limitation becomes impossible if the databases can't be disaggregated to avoid passing to users information which they have no need for and no entitlement to see.  This must be the most important of the lessons to be learned from this episode.  (3)  If any part of the database — and certainly if the whole of it — really had to be transmitted to the NAO, as distinct from being accessed by NAO officials in HMRC premises under supervision, it should have been (a) encrypted, and (b) transmitted electronically from HMRC to NAO computers.  Copying the whole thing unencrypted onto CDs was a fantastically crude, primitive and insecure way to do it, as the simplest private computer-user surely knows.  And (4) entrusting the CDs to TNT, the government's internal communications courier, was only marginally less irresponsible than pushing them through a nearby letter-box.

The obvious and principal lesson from all this is that all government databases containing private information about citizens or any other sensitive material should be as small and limited in scope as is consistent with their efficient and secure use;  that only those with a genuine need to know should be allowed access to them, and even then only to that information which is specifically needed;  that all categories of information in a single database should be easily detached from the rest so that other categories are not needlessly exposed to those with no need for them;  that copying the data and transmitting them from one place to another should be the rare exception, not general practice;  and that when the data do need to be transmitted, they must be securely encrypted and transmitted electronically, not copied onto intrinsically insecure physical media such as disks for physical transport from place to place.  All this is pretty elementary.  IT specialists advising government departments must know it almost by instinct.  It's legitimate to ask whether they have communicated concerns about current practices to ministers and if so what if any action ministers have tried to take to correct them.  But the over-simplified nature of the criticisms made by politicians and the media suggests that the breadth of the problem is still not widely understood.  The one political figure who both understands it all and articulates the problem clearly and repeatedly is David Davis, the increasingly impressive (and surprisingly liberal) Conservative shadow home secretary.  The government should have the humility to listen to him and give the system a real shake-up accordingly.  Among other things, ministers should recognise that the giant national identity 'register' or database planned as back-up to future compulsory ID cards, containing a huge mass of disparate information about everyone in the UK from birth to death, is simply irreconcilable with the most basic principles of privacy and security in handling personal information, and should be abandoned by easy stages as fast as possible consistent with the least possible loss of face. 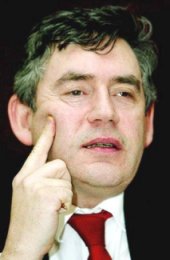 The savage attacks on the government generally and Gordon Brown in particular by a gaggle of retired generals and admirals in the house of lords are but the latest in the government's recent string of woes.  Ministers are certainly open to criticism for their failure to provide adequate living conditions and equipment to our armed forces at a time when they have sent them off to risk death in not one but two unwinnable and unnecessary wars, failing also to provide the wounded and disabled in action with proper medical care, conditions and compensation.  But a large share of the blame for these failures must rest with the heads of the three services and their other senior officers, who have a major say in decisions about the allocation of the resources provided for defence by the Treasury.  Generals and admirals (and air marshals) always want more money than they are given for ever more sophisticated and expensive equipment ranging from aircraft carriers to night vision goggles;  always make a convincing case for what they demand;  and almost always have to be partially disappointed.  When they complain about poor provision for soldiers' living quarters and medical care, it's legitimate to ask them whether, when in office, they were among those pressing for new aircraft carriers, new and yet more sophisticated aircraft to fly from them, and the renewal of the Trident submarine nuclear weapon delivery system, each costing many billions of pounds, collectively raising major questions about the real need for any of them.  The sacrifice of any of these colossal items would release more than enough funds for more humdrum purposes that most closely affect our fighting soldiers, seamen and airmen, those who work to support them, and their families.  Money available for defence, although consistently increased year by year and although the highest amount of any western defence budget apart from that of the US, can never be unlimited, so allocation and priorities must always be the name of the game.  Ministers must certainly take their share of the blame for recently exposed and shameful shortcomings; but military chiefs of staff past and present should accept their share of it, too.

There remain puzzling questions about why Gordon Brown and his colleagues persist in their attachment to policies which become more obviously indefensible by the day:  the most obvious examples being the renewal of Trident, ID cards (especially including their accompanying national identity register) and the further extension of the already grossly excessive 28-day maximum time in which terrorist suspects may be imprisoned without even being charged, still less tried or convicted of any specified offence.  The varying justifications advanced for these discredited policies have repeatedly been exposed as invalid. Refusal to drop them (if necessary by easy stages, to minimise humiliation) looks increasingly like personal obstinacy verging on the perverse.  If the government continues to try to put them into effect, the consequences seem all too likely to be calamitous.  In that case, the Brown administration will deserve all it gets.  So far, however, the evidence doesn't really support the shrill accusations of incompetence and irresponsibility now being thrown around by the media and the opposition parties.  There's still time and opportunity to put things right, given the requisite degree of humility and flexibility in reacting to the government's and others' mistakes, misjudgements and misfortunes.  Good luck, so far mainly absent, needs to be earned.