Joanna Lumley (pictured below with the much-decorated Gurkha veteran and holder of the Victoria Cross, Tul Bahadur Pun VC) describes on the Gurkha Justice Campaign website the campaign for a decent deal for former Gurkhas who want to settle permanently in Britain with their families:

Gurkhas are fighting for Justice. They want the same terms and conditions as their UK and Commonwealth counterparts.

Britain has had no greater friends than the Gurkhas. They have served all across the world in the defence of our country for nearly 200 years. Over 45,000 died in the two World Wars as part of the British Army. They are still fighting in the British Army today.

You may have seen in the media that the Gurkhas have been fighting in Parliament and the Courts. Step by step, things are getting better – but there is a long way to go.

The Government decision of 25th April 2009 on Gurkha settlement rights is yet another huge betrayal of the Gurkhas who have served our country.

Only a tiny fraction of the Gurkhas who retired before 1997 will win settlement rights under the new policy. A Gurkha will have to have served 20 years or more or won one of a handful of medals: the big majority of Gurkhas served for 15 years under standard army policy.

You can read the full details of the Government’s decision online.

The campaign for full Gurkha Justice will now be taken back into Parliament and the courts. The Government needs to know they will have a huge campaign against them who will commit to righting this wrong.

Please sign up to the campaign below. We will keep in touch with you about how you can help: there is now much that needs to be done.

Join me in the campaign: together, we can finally right this wrong.

The extent of the good faith of the government’s decision can be judged by one of the absurdly demanding criteria for permission for ex-Gurkhas to settle in the UK:

You completed 20 or more years’ service in the Brigade

— and as Joanna Lumley points out, apart from officers, Gurkhas aren’t allowed to serve for longer than 15 years. 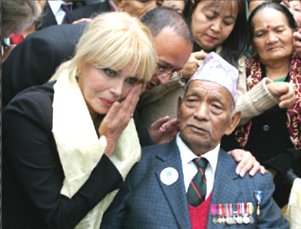 This decision, effectively excluding from settlement in Britain huge numbers of men who have served our country bravely for many years, as well as their families, doesn’t only shame our government, with its phobia about immigration and its cowardice in the face of the most reactionary tabloids:  it shames us all, if the decision is allowed to stand.

(which has attracted nearly 200,000 signatures at the time of writing — pm on 29 April 2009).  Please also e-mail or write to your MP — if you don’t know it, you can probably get his or her e-mail address from the MP’s website by Googling his/her name, or you can do the whole thing through the excellent free facility at the “Write to Them” website:

The government was challenged on this issue this afternoon on a LibDem-sponsored motion.  At the last moment, —

Two concessions on the right of former Gurkhas to settle in the UK have been made by the government in an effort to avert a potential Commons defeat.Ministers have promised to start a review of rules by the summer – and said veterans would not be deported.
[BBC report, 29 April]

Unbelievably, these two token gestures — the first of which is brazenly meant to buy time, and the second apparently to incite Gurkhas who don’t qualify under the draconian rules to stay on in Britain anyway, presumably risking imprisonment if they do — are believed to have satisfied some Labour MPs who had been contemplating voting against the government.  Nevertheless, —

The government has lost a Commons vote on its policy of restricting the right of former Gurkhas to settle in the UK. MPs voted by 267 to 246 in favour of a Lib Dem motion that the government should extend an equal right of residence to all Gurkhas.  Earlier Lib Dem leader Nick Clegg said the current policy, announced by the government last week, was “shameful”.
Gordon Brown said earlier he wanted justice for the Gurkhas but any policy change had to be affordable.
http://news.bbc.co.uk/1/hi/uk_politics/8023882.stm

The government has been deservedly humiliated by this result and will now presumably have to return to the drawing-board.  This makes even more urgent (and potentially productive) maximum pressure on Ministers and MPs for all Gurkha veterans and their families to be allowed to settle permanently in Britain on their retirement — the least we can do for them to repay a debt of honour.  The prime minister’s reported insistence that “any policy change had to be affordable” is beneath contempt.