Kosovo, curtain-raiser for Iraq, still in search of a solution

Anyone under the widely shared illusion that NATO's attack on Serbia in 1999 over Kosovo permanently resolved the problem of Kosovo's relationship with the rest of Serbia needs to have another think.  The veteran peace-making miracle man, Martti Ahtisaari, former President of Finland and accomplished godfather of UN solutions to intractable problems, is shortly to announce his proposals for the future status of 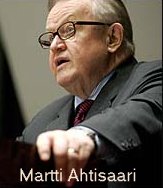 Kosovo, having consulted at length with the governments of Russia, the US, the UK, France, Germany and Italy, the leaders of Serbia and Kosovo, and many others.  The forecast is that (after yet another round of protracted 'consultations') he will propose for Kosovo a form of internationally policed quasi-independence from Serbia — but without any specific mention of the i-word; probably also without any entitlement to membership of the UN, other countries then free to decide whether to 'recognise' Kosovo as a state or not. This, like any other kind of severance of Kosovo from Serbia, will be bitterly and perhaps violently opposed by the great majority of the people of Serbia, and (not unnaturally) by the small, beleaguered Serbian minority still clinging on in Kosovo.  For there are still some Serbs in Kosovo despite the virtual ethnic cleansing that followed the departure of the Serbian army and police in 1999 and the installation of the NATO-led international régime in Kosovo under the revised settlement programme skilfully negotiated by — you guessed! — Ahtisaari, with discreet help from the Russians and the Americans, after the NATO bombing had failed to bring the Serbs to heel.

There's a predictably excellent account of the current situation in the Guardian of 26 January 2007 by Jonathan Steele, who argues with his usual persuasiveness for the award of full independence to Kosovo without further delay, despite the acknowledged risks.  One such risk is that when the package is submitted to the Security Council for endorsement, the Russians, traditional protectors and patrons of the Serbs, will veto it. There's also the risk of armed resistance by Serbia to the secession of Kosovo, prospect reinforced by the sweeping victory of the Serb nationalists (united in their determination that Kosovo should remain part of Serbia) at the recent Serbian elections.  Another risk is that even qualified independence for Kosovo will precipitate a demand by the Bosnian Serbs for secession from Bosnia and union with Serbia, a situation that could also degenerate into violence.  Any move by the newly independent Kosovars, often referred to as the Kosovo Albanians, to seek a union with their kith and kin in neighbouring Albania would give a strong fillip to the campaign for a Greater Albania which in turn would arouse intense alarm throughout the region, providing another destabilising element.  Yet another daunting factor is the impact of any UN-approved Kosovo secession from Serbia, justified on grounds of nationalism and self-determination, on the serious dispute between Russia and Georgia over the future status of South Ossetia and Abkhazia (usefully described in an article last August in the Christian Science Monitor).  There could even be consequences for Chechnya, in that case wholly negative for Moscow.  Here too there's a real danger of disputes erupting, or erupting again, into violence.

There's a sad irony in all this.  The Kosovo nationalists fighting for their independence from Serbia in the period leading up to the NATO attack on Serbia in 1999 were given a promise by the Americans of an "act of self-determination" — unmistakeable code for independence, the inevitable result of any such exercise of self-determination — in exchange for the Kosovars' reluctant acceptance of the NATO ultimatum drawn up at the Rambouillet conference in March, 1999.  The ultimatum had been carefully crafted to ensure that the Serbian government — any Serbian government — would reject it, as indeed it duly did.  The US and some other western delegations at Rambouillet, presumably including the British who co-chaired the conference with the French, were determined to ensure that their ultimatum would be accepted by the Kosovars and rejected by the Serbs.  This was designed to provide a plausible justification for the NATO aerial assault on Serbia on which Madeleine Albright, the then US Secretary of State and leader of the US team at Rambouillet, was determined, drawing on a false and misleading analogy with the west's failure, earlier, to use force against the Serbs in Bosnia until too late. 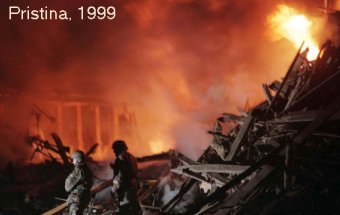 NATO's escalating attack on Serbia for 11 weeks in 1999 had many eerie parallels with the US-led attack on Iraq four years later, for which in many ways Kosovo was intended to be the model.  Contrary to the current received wisdom, both wars were illegal, neither having been authorised by the UN Security Council and neither fought in self-defence.  Both failed in their proclaimed objectives:  it wasn't the NATO bombing that eventually dislodged the Serbian forces and administration from Kosovo but the flexible and constructive behind-the-scenes diplomacy of an American and a Russian negotiator (Strobe Talbott and Viktor Chernomyrdin) — and Martti Ahtisaari.  Both wars were unnecessary:  the terms eventually accepted by the Serbs could and should have been negotiated with them at Rambouillet, producing the same as the eventual settlement without a single bomb being dropped.  Similarly, if the UN inspectors under Blix had been allowed to complete their work in Iraq, they might well have been able to show that Iraq had no WMD, which would have demolished the sole British rationale (at the time) for participation in the attack and occupation.  Both wars were publicly asserted to have a variety of objectives and justifications, some of each of them sold on a deliberately false prospectus.  Both military actions were disproportionate to both their real and their proclaimed objectives.  Both turned out to be counter-productive:  the NATO bombing of Serbia actually accelerated and aggravated Serbian ethnic cleansing in Kosovo and precipitated for the first time the wholesale flight of refugees into neighbouring countries.  So far from producing a solution to the problem of how Kosovars and Serbs could live together in peace in Kosovo, the NATO attack actually aggravated it, and the international administration which was eventually installed under the US-Russian-Ahtisaari settlement has merely frozen the problem — and made it worse by presiding over the expulsion of thousands of Serbs from their Kosovo homes.

In case some of these assertions sound improbable, I have set out the ample and damning evidence in support of them in a much earlier piece here.   Nothing can excuse the brutal behaviour of the Serbs towards their Kosovo compatriots in their repeated over-reaction to the 'liberation struggle' — or 'terrorist campaign' (select whichever description you prefer) — waged until 1999 by the Kosovo Liberation Army;  but it's almost equally hard to excuse the misjudgements, the duplicity, and the failure to exhaust the resources of diplomacy before resorting to the use of force, which characterised the western performance at Rambouillet leading, as it was always designed to do, to the NATO bombing campaign, just as the same failures characterised the performance of the US and UK governments over Iraq in 2003.  Kosovo, not Iraq, was Blair's first illegal war;  sadly, it was Clinton's and Robin Cook's, too.

I don't of course pretend to have a solution to the problem of what to do now about Kosovo.  No possible solution is without its risks and defects, and — as Jonathan Steele rightly says today — the stakes are high, as always in the Balkans.  What's certain, though, is that the intractability of the problem now is in part the fruit of the misjudgements of the western powers in 1999 in their hasty, premature, unnecessary, unsuccessful, and above all illegal resort to the use of force.  History was all too soon to repeat itself.

Backdate:  For a typically idiosyncratic take on the 1999 NATO (i.e. US) bombing written by the late Edward Said while the bombing was still going on, click here.   Edward Said was right about the effect of the bombing on Serbian support for Milosevic, whose fall occurred only months later, toppled not by bombs but by the ballot box.

Update (30 Jan 2007):  I am flattered that this this post has been reproduced, with full acknowledgement but no trackback, by the web journal Atlantic Free Press, which I had previously and gladly authorised to reproduce any Ephems posts that it fancied.  It has prompted some vigorous and readable comments (there, not so far here!).