There are several possible explanations for David Cameron’s (and other Conservative ministers’) hardening objection to Lord Justice Leveson’s “essential” proposal that the new, press-initiated, independent and voluntary regulation of the press should be “underpinned” by a new law formally validating the new régime and guaranteeing press freedom from state control.  The most obvious explanation, although not necessarily the right one, is that the prime minister lacks the backbone to stand up to the still-powerful newspaper proprietors and the right-wing press, or to his own Conservative libertarian right wing, nearly all of them noisily denouncing any idea of a law and insisting, against Leveson’s clear contradiction, that any law will amount to state regulation of the press – Stalinism without the charm.  Another explanation is that Cameron genuinely believes that any law, even if it explicitly guarantees the press’s immunity from state control of content, will in practice turn out to be so complex and detailed that it will indeed amount to state control, as most of the press and some of his party colleagues claim to fear.  Yet another, the one on which he seemed to lay most stress in the debate on Leveson in the house of commons, is that even the most innocuous under-pinning statute would be vulnerable to authoritarian amendment by some future illiberal government and parliament.  This seemed, and seems, to me the most implausible of the lot:

The PM’s main “misgiving” about Leveson’s recommendation of a new law to underpin an independent press regulator reflects his fear that such a law could be amended or replaced by some future illiberal government in such a way as to infringe the principle of freedom of the press. But that danger must be much greater if there is no law already on the statute book that guarantees press freedom and the independence of the regulators than if there is. Leveson makes an irrefutable case for statutory backing for the new independent regulatory body he recommends, and which he stresses does not equate to statutory regulation. Parliament should clearly accept and act on it.
Brian Barder
London
(Guardian, 1 December 2012)

Sir Brian Leveson envisages that the under-pinning law that he proposes would constitute a bulwark against state regulation of the press, not an instrument of it.  Sir Harold Evans, perhaps the most distinguished British newspaper editor of our time, has remarked that the manifestly ‘free’ American press operates under the protection of just such a law – the highest form of law, namely the First Amendment to the United States constitution:

Congress shall make no law respecting an establishment of religion, or prohibiting the free exercise thereof; or abridging the freedom of speech, or of the press; or the right of the people peaceably to assemble, and to petition the Government for a redress of grievances.
http://www.britannica.com/EBchecked/topic/208044/First-Amendment

On the other hand, some American commentators, including the sainted Bob Woodward, one of the two reporters mainly responsible for unmasking President Nixon over Watergate, have been expressing horror at the idea of any UK law affecting the press, claiming that under the First Amendment any such law would be unconstitutional.

The latest bizarre twist in the dispute is the Culture Secretary’s promise to draft and publish a Bill based on the Leveson proposals. The Bill’s  declared purpose will be, not to present a government proposal for parliamentary legislation, the usual purpose of a government Bill, but the opposite: a document expressly designed to demonstrate by its reach and complexity that no such law could be made acceptable.  If the government, or the Tory part of it, goes through with this weird exercise, it will be up to the Labour Opposition (which supports the Leveson proposal) and the LibDem members of the governing coalition who also support an under-pinning law, to amend the government’s deliberately flawed Bill so as to demonstrate that it can be made acceptable and effective without seguing into what could amount to state control. 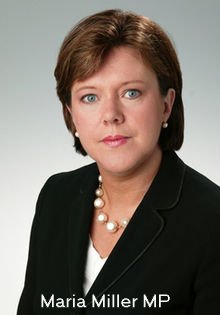 The Secretary of State for Culture, Media and Sport, one Maria Miller MP, promoted a few weeks ago from her former invisible role as Minister for Disabled People at the Department for Work and Pensions, has made numerous universally unimpressive appearances on radio and television since the publication of Leveson,  loyally denouncing any idea of an under-pinning law while constantly repeating in the same breath her mantra that the government fully accepts all the “principles” laid down by Leveson, apparently unaware that the two propositions are mutually incompatible.

Finally, today’s Financial Times reports that Ms Miller is convening a meeting of leading newspaper proprietors and editors next week at which she will urge them, not to draw up a plan along the lines proposed by Leveson for an independent press regulator, as they are invited to do by Leveson, but instead to devise an alternative to the Leveson blueprint!   Apparently the prime minister’s and his Culture Secretary’s ‘acceptance of all the Levenson principles’ has some far-reaching limitations.

There are evidently some lacunae in the Levenson report:  his unwillingness to condemn at all forthrightly either the suspicious failure of the police to investigate and prosecute the widespread criminal activities of British journalists, or the potentially corrupt relations between leading politicians of both main parties and some of the mightiest press magnates:  the absence of clear guidance on how to regulate those press publishers who opt not to sign up to the new (voluntary) independent regulatory régime;  and the failure to address the over-concentration of press ownership in too few, often non-British hands.  Then there’s the thorny question of the impossibility (thank goodness) of regulating the internet with the wild excesses of the social media and the blogosphere.  But Leveson has given the press and parliament more than enough demanding tasks to be getting on with.  It’s sad that the coalition’s Tory members, whose leader once promised to accept and act on Leveson’s recommendations unless they turned out to be “bonkers”, are already rejecting key elements in them, inviting the press once again, for the seventh time in as many decades, to regulate themselves without having to answer to any form of external, independent but non-state supervision, in the pitiful hope that this time self-regulation will eliminate the gross excesses and misbehaviour which up to now have disgraced substantial sections of the fourth estate.  Up with that we should not put.