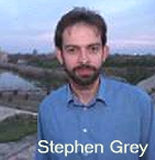 No one man or woman has done more than the prize-winning journalist Stephen Grey to expose the scandal of Extraordinary Rendition — the procedure under which American intelligence in one form or another kidnaps people it suspects of involvement in terrorism, plucking them off the streets in foreign countries, and secretly and illegally flies them to other countries where they can be interrogated by methods that would not be tolerated even in the United States; in layman's language, probably in legal language too, tortured.

The results of Stephen Grey's latest investigations were vividly recounted (by Grey himself) in his Channel 4 programme Dispatches, broadcast on 11 June.  Here's the account of this important programme provided on Grey's website:

Dispatches exposes a new phase in America's dirty war on al Qaeda: the rendition and detention of women and children. Last year, President Bush confirmed the existence of a CIA secret detention programme but he refused to give details and said it was over. Dispatches reveals new evidence confirming fiercely-denied reports that many of the CIA captives were held and interrogated in Europe.

Those prisons may now be closed but the programme is by no means over, it's just changed. A new front has opened up in the Horn of Africa and America has outsourced its renditions to its allies.  Reporter Stephen Grey (author of Ghost Plane: The True Story of the CIA Torture Programme) investigates America's global sweep for prisoners – obtaining exclusive interviews with former detainees who claim they have been kidnapped and flown halfway across the world to face torture by America's allies. The film opens with an examination of the most notorious rendition story to date – the kidnap of Egyptian cleric Abu Omar. This month in Italy the trial opens of twenty-five CIA officers accused of snatching Omar from the streets of Milan in broad daylight and flying him to Cairo four years ago. Grey travels to Egypt to secure an exclusive interview with Omar who defies the warnings of his interrogators not to speak publicly about his treatment. He details the torture that was inflicted upon him in his fourteen-month detention and the number of other 'ghost detainees' he encountered – people who are being held in secret, without charge.

The film then turns to Pakistan – one of America's most significant allies in the 'war on terror'. Since 9/11, the state's intelligence services have apprehended over five hundred people as terror suspects. Grey investigates what happens to the 'disappeared' amid claims that America pays Pakistan a bounty for every suspect they capture.

Turning his attentions closer to home, Grey gains exclusive access to an official European investigation which has found evidence that CIA prisons housing al Qaeda suspects have also existed in Europe and reveals the interrogation techniques that have been used against such high-value prisoners. The Bush administration claim such techniques stop short of torture but Grey discovers that many in the CIA disagree and are concerned that using them may leave them open to criminal proceedings in the future and make the evidence gained inadmissible in a trial – preventing terrorists from being convicted in court.

Dispatches then examines the new battleground of America's war on terror – the Horn of Africa. Grey travels to Kenya and Ethiopia to investigate allegations of mass renditions involving women and children – where prisoners thought to have al Qaeda connections have been illegally transferred from country to country for imprisonment and interrogation. Grey uncovers evidence of secret rendition flights on which suspects were flown from Nairobi into war-torn Somalia – a state with no effective law or government. Amongst the suspects were women and children – he hears a first-hand account from one Briton who was on one of the flights who describes being beaten, interrogated and finding himself in a prison cell opposite a woman and a five-year-old boy. Another woman who was rendered to Somalia describes being flown on to Ethiopia with other women and children – where one pregnant woman gave birth to her child whilst in detention.

Dispatches questions the legality and effectiveness of America's rendition programme and asks whether the way detainees have been interrogated will undermine the legal process to bring real terrorists to trial and conviction.

Some highly questionable things have been done by British civilian and military authorities under cover of the so-called 'war on terror' (not in fact a war at all), but I would like to think that nothing has been done in Britain's name that approaches the prolonged, systematic and deliberate abuse of due process and the rule of law represented by extraordinary rendition (and Guantanamo, one of the destinations to which some of the kidnapped suspects have indeed been 'rendered').  But even here Britain's hands are not by any means clean:  there are strong grounds for believing that some parts of the British government machine, probably including some ministers, have been complicit with the Americans in knowingly providing the use of British airports and airspace for US flightscarrying out extraordinary rendition.  Ministerial denials and heavily qualified admissions have been extremely carefully worded, seemingly hingeing on how they define 'torture' and whether they have been able to turn a blind eye to the kinds of ill-treatment, clearly amounting to torture, to which the victims of extraordinary rendition are subjected.

It's really hard to comprehend how a mature democracy such as the US, with its long-standing constitutional commitment to due process and the rule of law, its elaborate checks and balances, its extraordinary openness that makes the keeping of official secrets so difficult, and the sweeping investigative powers of the Congress, can tolerate for so long such scandalous malpractices as those which Stephen Grey's investigations over the last two or three years have revealed.  Why has civilised liberal opinion in the States been so slow to wake up to such shameful wrong-doing, and so seemingly reluctant to raise the roof with such deafening protests as to make it impossible for these criminal misdeeds to continue?  I'm genuinely baffled.  I wonder if Grey's Dispatches programme could be shown on US television — and, if so, whether it will be?

Full disclosure:  Stephen Grey is a friend.  Keep up the good work, Stephen — and don't go out alone after dark….