MPs’ expenses and the Speaker

The Speaker of the House of Commons, Michael Martin, made a statement this afternoon (11 May 09) on MPs’ expenses, and took a number of points of order on the subject.  This must have been one of the most extraordinary performances from the Speaker’s chair in modern times.

My wife, not easily moved to semi-public protest, has sent this message to our (Labour) MP:

I hope that after Speaker Martin’s disgraceful performance this afternoon you will support those who are trying to persuade him to step down.  I think that most dispassionate observers feel that he has done the Commons a disservice by the way he has handled the question of MPs’ expenses and allowances from the time that it first arose in the House.  But to call in the police to investigate leaks is surely now a complete misjudgement of the public’s need to trust their MPs: there are many who are beginning to wonder whether the police should rather be called in to investigate the activities of their MPs – not you, I hasten to add.   And then to attack Kate Hoey and Norman Baker, two MPs making perfectly valid points of order, was completely unacceptable.  I think the House has tolerated him long enough.

J. might also have mentioned Speaker Martin’s brutal response to a perfectly sensible question from Patricia Hewitt: in the words of The Times report, —

He then curtly dismissed Patricia Hewitt, the former Health Secretary, for suggesting that “citizens’ juries” be brought in to give the discussions public legitimacy. 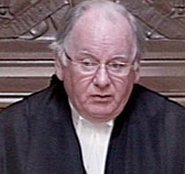 But it was the Speaker’s angry and sarcastic attacks on Kate Hoey and Norman Baker that seemed both astonishing and indefensible.  The same Times report commented justly that this was “the first time in recent history that the chair has made personal criticisms of members without provocation.”  Ms Hoey’s offence was to have suggested that the police had more pressing things to do than to mount an investigation into the leak of the information about MPs’ expenses claims to the Daily Telegraph.  This prompted a tirade from the Speaker who seemed far more outraged by the leak of sensitive personal information about MPs than he was about the way a defective system had been systematically abused and exploited by a raft of MPs of at least two major parties and possibly more.  (A video clip of part of the attack on Ms Hoey is also included in the online version of the same Times report;  there is a clip of the Speaker’s initial statement here.) It’s not often that this blog quotes the Daily Mail approvingly, but this report gives the flavour:

… instead of expressing regret, [the Speaker] yesterday launched a series of ill-tempered attacks on members who dared to question his handling of the crisis. Challenged by Labour’s Kate Hoey over the wisdom of his decision to call in police to investigate the leak of expenses data, the Speaker appeared to lose control of his emotions. He breached the historic Parliamentary convention that the Speaker should never mount personal attacks on MPs. Mr Martin told Miss Hoey, a former Sports Minister, that he had endured her ‘pearls of wisdom’ late at night on TV news channels. ‘It’s easy to talk then,’ he snapped. ‘It’s easy to say to the press this should not happen – it’s a wee bit more difficult when you don’t just have to give quotes to the press and nothing else.’

The Speaker’s preoccupation with the leak, and his determination to bring the leaking miscreant to justice, are surely misconceived.  If ever there was a ‘public interest’ defence, this has got to be it.  The bulk of the information leaked was due to be published officially within a few weeks anyway, by order of the courts and the Freedom of Information Commissioner, despite fierce opposition from the Speaker on behalf of most MPs — not however including Kate Hoey or Norman Baker, both of whom have consistently spoken out against the attempt to keep the information under wraps (nudge, nudge).  The part of the information that was still going to be withheld was the addresses to which the expense claims related.  But if we had had the information on claims without the addresses, one of the worst of MPs’ abuses — constantly changing the ‘second homes’ for which expenses were claimed — would have been hidden from view.  It’s difficult to imagine a jury convicting whoever was responsible for outing this shabby behaviour, verging on corruption, by a considerable number of MPs.  MP after MP now declares that ‘the system is rotten’: even Mr Speaker Martin accepts that it will have to be changed.  But the real offence that has roused such public anger and contempt is not so much the rottenness of the system (although that too) as some MPs’ extensive abuse and exploitation of that system for personal gain.  If the Speaker can’t understand that key point, it’s hard to see how he can exercise his leadership role in a way that will gradually restore a degree of public confidence, not just in individual MPs but also in the parliamentary system, and ultimately in politics itself.  If anyone doubts the depth of public disillusionment, he has only to read the ferocious comments on an earlier blog post of mine in Ephems, reproduced in Labour List, in which I ventured to suggest that MPs were relatively poorly paid.   If I were an MP, some of these comments would surely drive me to ask for extra police protection — at the taxpayers’ expense, of course.

Stop press:  tomorrow’s batch of fresh revelations by the Daily Telegraph will apparently include a claim by a prominent Tory MP for repairs to his moat.  His moat!

As for the Speaker, as usual my wife has succinctly said it all.