Muslims and the west: a notable television debate

Anyone who missed the debate about the Muslim protests over the Danish cartoons and their global implications on Newsnight (the BBC2 nightly television news programme) last Monday evening (6 Feb 06) — and who has broadband — really should listen to and watch it on the BBC Newsnight website [click on ‘Watch the debate’ under the crescent] while it’s still available there.  This was a rare opportunity to hear and watch a number of highly articulate Muslims, men and women, discussing these sensitive issues among themselves as well as the non-Muslims on the 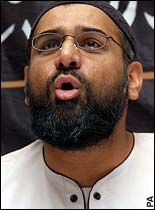 panel.  Unfortunately the first part of the discussion was constantly disrupted by the panel’s representative of Islamic extremism, Anjem Choudary of Al Ghurabaa (formerly UK Organiser for Al Muhajiroun and follower of Sheikh Omar Bakri Muhammed), who shouted unstoppably throughout the proceedings and derided the other Muslims as unrepresentative hypocrites, the women because they were not ‘covered’, the man because he had no beard.  The other panellists and Jeremy Paxman in the chair handled this with remarkably good grace, Paxman at one point silencing Choudary by saying firmly and memorably, "we’re moving on, matey."

A chilling conclusion from the discussions was that the protest demonstrations and confrontation taking place all over Europe and the Muslim world, now including a number of deaths, no longer have much if anything to do with the Danish cartoons, which were merely the match that ignited a huge waiting bonfire.  The targets are no longer just the cartoonists or the editor who published the cartoons but Denmark and the Danes, all other Scandinavians, and increasingly the whole of ‘the west’.  The flames are fanned by events in Iraq, Afghanistan, Chechnya and especially Palestine, by a fanatically anti-western new President in Iran and the nuclear weapon issue there, by chaos in Lebanon, by feelings of alienation and frustration on the part of thousands of young — and old — Muslims living in predominantly non-Muslim European countries, by the fears of Islamic extremist terrorism following 9/11, 7/7 and other attacks and by the angry resentment aroused by western governments’ responses to them (the ‘war on terror’, easily represented as a war on Islam) —  and that is by no means a comprehensive list of Muslim grievances and flash-points.

Paxman concluded the debate, after the merciful departure (voluntary or otherwise) of Anjem Choudary, by asking the remaining participants whether the whole cartoon issue would blow over or whether it had sparked off something so fundamental that it had permanently changed the relationship between the cultures of Islam and the west.  Most of the responses indicated a belief that things would never be the same again.

If you haven’t seen this impressive programme, now’s your chance.

My earlier comments on all these issues are on my earlier Ephems pieces here; also see Owen’s comments on his own blog here and here.  Some viewers’ comments on the Newsnight debate are here.  Civilised discussion of these difficult and sensitive matters is still possible, thank — er, goodness.  Three cheers, not for the first time, for the BBC.

Update (12 Feb 06):  The myth that Islam forbids, and has always forbidden, pictorial representations of the Prophet is effectively exploded here, among other places.