New mystery of Megrahi, the PTA and the UN resolution

Three cheers for The Scotsman, the first of the mainstream media to publish an article that at last spells out some of the questions arising from the contradiction between the Libya-UK Prisoner Transfer Agreement (which the Libyans and the Blair government wanted to use to transfer al-Megrahi, convicted of involvement in the Lockerbie bombing, from a Scottish to a Libyan prison) and the binding UN resolution which required Megrahi to serve his sentence in the UK.  For the first time, too, the Scotsman article exposes the extraordinary arguments devised by the Blair government in an attempt to resolve the contradiction, asserting that despite the UN resolution there would have been no obstacle in international law to transferring Megrahi to a Libyan jail under the PTA, and offering a bizarre justification for the view that the UK could have transferred Megrahi without breaching its political commitment to the original initiative and without the need for the prior agreement of either the US government or the UN Security Council.  And, finally, The Scotsman has done us all a favour by publishing the responses to the new article of both the Scottish Justice Secretary, Kenny MacAskill (who took the decision to release Megrahi on compassionate grounds, not to transfer him to a Libyan prison under the PTA), and also of the UK Foreign & Commonwealth Office, whose response seems to imply a failure to grasp the nature of the problem (for both responses, please read on).  As the author of the Scotsman article, I have put its full text on my website at  https://barder.com/lockerbie-megrahi-and-the-prisoner-transfer-agreement-a-mystery. 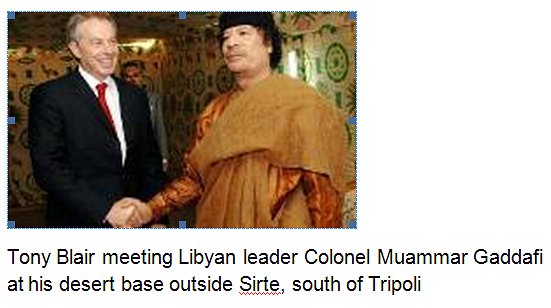 Previously classified documents now declassified and released by the Cabinet Secretary have thrown some new light on these still puzzling and potentially significant questions.  Why did the Libyan president Col. Gadaffi and then UK prime minister Tony Blair attach so much importance to concluding a UK-Libyan Prisoner Transfer Agreement under which they clearly envisaged transferring al-Megrahi, convicted of involvement in the Lockerbie bombing and serving his sentence in a Scottish prison, to Libya to serve the rest of his sentence in a Libyan prison, when doing so would have contravened original US-UK initiative, formally approved in a mandatory UN Security Council resolution, which clearly stipulated that his sentence was to be served in the UK (i.e. Scotland)?  And why has this glaring contradiction not been dragged out of the shadows and explored in parliament and the mainstream media while those involved — especially Tony Blair, Jack Straw and the Libyan Colonel — are still around to answer the questions and unravel the mystery?

At one stage in the negotiation of the PTA the UK government, at the prompting of the Scottish government, tried to include in the PTA a clause explicitly excluding Megrahi from its scope, precisely because of the provision in the original agreement that his sentence was to be served in the UK.  This is confirmed in a letter from Lord Hunt [PDF file], a then junior minister in the Ministry of Justice, to the Scottish Justice Secretary, dated 17 August 2007:

The UK side later dropped the proposed exclusion clause under Libyan pressure, assuring the Scots that it would still be open to them to refuse any application for the transfer of Megrahi under the PTA.  But since the UK side had admitted in writing that the PTA “would not cover al Megrahi”, what was the point of having the PTA?  And why the U-turn later under which the UK side claimed that the PTA could have covered Megrahi after all?

The Scotsman‘s news story accompanying my article of 17 February helpfully includes the response of the Scottish Justice Secretary’s spokesman to the article:

A spokesperson for justice secretary Kenny MacAskill said last night: “Sir Brian is absolutely correct. It was clear that both the US government and the American families objected to prisoner transfer, and did so on the basis of formal agreements entered into by the UK Labour government in 1998 regarding the place of imprisonment of anyone convicted of the atrocity.

“That, indeed, is why the justice secretary rejected the prisoner transfer application.”

He added: “The justice secretary rejected prisoner transfer and granted compassionate release – an entirely different process involving different criteria – according to the due process and practice of Scots Law.”

This helpfully, and I think for the first time in a public statement, confirms that the reason for the consistent opposition of the Scottish government to the PTA, and to any suggestion that Megrahi could be transferred to Libya under it, was precisely that it contravened a key provision of the original initiative as approved by a Chapter VII Security Council resolution.  But it would be useful to know whether Scottish ministers based their objections to the PTA on  this contradiction in their correspondence with the UK government at the time when the UK was negotiating the PTA with the Libyans: and why they didn’t make public until now their reasons for objecting to the PTA.

The response of the Foreign & Commonwealth Office to my article was brief and not at all to the point.  Can my old department’s spokesperson have had the remotest understanding of the questions posed by the article? —

A Foreign Office spokesman said: “The UK government believes it was the wrong decision to release Mr Megrahi.”

I continue to think that we are entitled to a better answer than that to these troublesome questions.  To quote my own Scotsman article:  Why did the UK agree a deal with Gaddafi to send Megrahi to a Libyan prison in defiance of a binding United Nations resolution?  The Prisoner Transfer Agreement is obviously inconsistent with the US-UK initiative and thus with a binding UN resolution;  so what was the point of the PTA?  Did Tony Blair or Jack Straw point out to the Libyans during the lengthy negotiation of the Prisoner Transfer Agreement that under the US-UK initiative and the UN resolution Megrahi could not be transferred to a Libyan prison?  If not, why not?  Were the Libyans or indeed Blair and his accompanying officials aware of the inconsistency — one acknowledged in writing by a junior minister in the Ministry of Justice?  Could they have failed to notice it?  What were the grounds for the UK government’s assurance to the Scottish government that, despite Lord Hunt’s admission to the contrary, there would be no international law problem over transferring Megrahi under the PTA?  How could the then UK government have justified departing unilaterally from the terms of the agreement and the UN resolution without the prior agreement of both the US government and the Security Council?  Why has the new Tory government, ever hungry for sticks with which to beat its Labour predecessor, failed to raise these questions, instead contenting itself with holier-than-thou condemnation of MacAskill’s perfectly proper, legal and humane decision to release Megrahi on compassionate grounds?  And why, until now, have neither the mainstream media nor, for the most part, the issue-addicted blogosphere, taken these matters up, explored them and demanded better answers than we have been fobbed off with so far?  As the King of Siam memorably remarked:  Is puzzlement.