As everyone knows from reading all the deeply respectful reviews by all the critics in the world, Brokeback Mountain is a beautiful and moving film, beautifully acted, directed and photographed, truthful and courageous in its sympathetic treatment of the love of two macho men for each other.  The Wyoming[1] scenery and even the music are beautiful, too. It’s all beautiful.  I hated it.  It’s relentlessly miserable from start to finish.  Compared with this movie, Brief Encounter was a barrel of laughs. Everyone in Brokeback spends most of the time making everyone else even more miserable than before.  It doesn’t have a happy beginning, middle, or (least of all) ending.  If you have read even a single-paragraph review of it before you see it, you will know precisely what is going to happen right up to the last five or ten of the film’s interminable 134 minutes (it’s based on a short story!), and you can easily guess what’s going to happen in the last ten minutes, too.  There is no suspense, no ambiguity, no humour, no occasional lightness of touch to put the tragedy into sharper relief. It moves at a slug-like pace from start to merciful finish.   After  the first twenty minutes or so I began to resent the obligation imposed by the movie’s dolorous style to watch it with reverence; I had to resist the pressure to allow myself to be emotionally manipulated by it.  After the first hour I wanted to stand up in my seat and shout, "For God’s sake, get on with it!"  I felt increasingly like Lucky Jim at the lecture on Merrie England.  And because I know from all those respectful reviews that this was Great Art and probably the Film of the Year, if not of the decade, heading for a shoal of Oscars and already hung about with Golden Globes, I felt more and more personal shame at my visceral dislike of it.

I saw it with three companions, including my wife.  They all loved it.  Everyone but me loves it.  You  will too, if you haven’t yet seen (and loved) it.   My extremely discerning daughter says:  "You’re just wrong.  Brokeback Mountain is fantastic."  Of course she’s right, like everyone else.  Just don’t go if you’re suffering from depression.

I have hesitated to put these remarks on the blog for fear of suffering the blogosphere’s equivalent of a lynching.  I have found the reckless courage to do so in the hope that it might find a kindred spirit out there somewhere, and in the determination not to read any hostile comments. 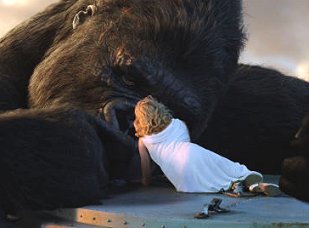 A couple of days ago we went to King Kong (187 minutes!).  It’s absolutely marvellous.  Its tongue isn’t quite so far into its cheek as to spoil the delicious, Rover-comic pathos of the scenes between pretty, lively Naomi Watts and the Great Ape with its huge sad bewildered eyes.  The computer animations and morphings are massively spectacular, totally incredible, and incredibly convincing.  Some of the battles between humans and dinosaurs, giant spiders, enormous land-based lobsters, and so forth, do go on a bit, but even they are good for a white-knuckled laugh.  The final scene on and up the Empire State Building is terrific cinema, however childish and predictable.  It doesn’t demand reverence or depend on solemnity.  It’s nicely judged in its balancing of wild adventure, sentimentality and fun, rather like the best of the Batman films only more so.  Taking into account the usual deafening trailers and crash-bang commercials that precede it, it requires a formidable commitment of time, but if you can spare it, do go.  (However, if you arrive about half an hour into the film, you won’t have missed a thing.  Kong doesn’t make his, or its, appearance until about the eighth reel.)  Not recommended for acrophobics.

One small idiosyncrasy is that King Kong could, anatomically speaking, just as well be Queen Kong, which I suppose would give it something in common with Brokeback Mountain .  I bet no-one thought of that post-modernist twist.

My wife, however, was bored stiff.  It takes all sorts.

[1] Alberta playing the part of Wyoming, I’m now told (see Comments below).  So even the scenery was ersatz!