Why on earth — the appropriate phrase, for once — do so many of us opt to live in northern Europe?   Walking along the Sitges sea front at 8 pm past the families and couples (same-sex, opposite-sex) lying in the sun on the endless beach, or playing or lazily swimming in the blue-green sea;  selecting any one of fifty excellent restaurants for supper (or dinner or a snack) and being sure of first-rate food, served up by friendly non-deferential non-snooty waiters; coming out into a brightly-lit Sitges at 1030 pm and walking back to the hotel along the scrupulously clean streets past the groups of beautiful cheerful not-drunk not-violent young people (including many Brits), admiring the audacious bikinis and minuscule shorts (girls, women) and 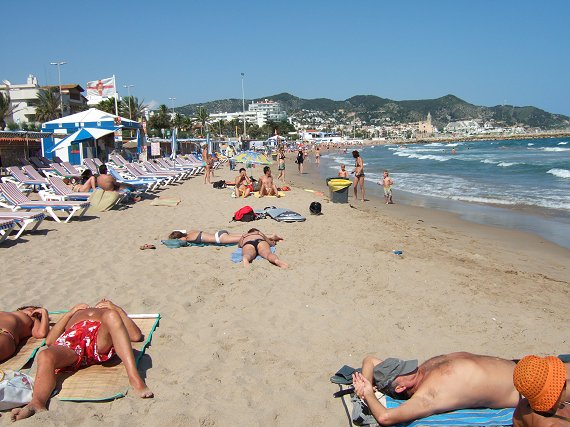 observing with less admiration below-the-knees baggy cargo shorts (boys, men, not so audacious); soaking up the bright but friendly sun — we really begin to think that P.H. (you know who you are) has got it right after all and that we should all be looking for airy spacious properties on the Costa Daurada with sea views, within walking distance of several outstanding fish restaurants.  (But this weekend's Financial Times reports that the numerous Brits who have emigrated to the Spanish seasides are now experiencing serious problems with the planning authorities and plunging house prices, so perhaps now isn't the time….)

I wore my big tin Obama For President badge (brought under protest by my Anglo-American daughter from New York along with Obama bumper sticker and Obama sweater) at the Santa Maria restaurant on the sea front for a cold cod salad lunch and a couple of gallons of agua con gas and was at once surrounded by delighted Spanish waiters chanting O-Ba-Ma!, O-Ba-Ma!  "Obama para el presidente, si?" (or words to that effect), said the maitre d'.  "Si, si," we agreed.  "Americanos, usted?"  "No, no.  British."  General bewilderment.  Anyway, we agreed that we were all for Obama, with or without a vote to make it come true.  Later our New York daughter and granddaughters, all three dual nationals and one a NY voter, joined us at the table fresh from the beach and began punctiliously writing their postcards.  Luckily they weren't wearing their Hillary badges.  The Guardian warns that Obama is craftily tacking towards the soggy centre.  Hope he knows what he's doing.  If he's as clever as they say he is, presumably he does.

Gatwick to Barcelona was our first experience of Easyjet, and a generally rather good one:  the main lesson was that it's well worth paying the extra five quid or so per person to get a priority boarding code on the boarding pass so that there's a virtual guarantee of an aisle seat and travelling companions seated nearby before the great unwashed swarm on board trying to find seats next to each other and grabbing aisle or window seats before they are all taken — scene eerily reminiscent of internal flights by Aeroflot in the Soviet Union in the 1970s, where pre-flight seat allocation was similarly unknown.  Being crammed into a middle seat, knees to chin, can't be much fun, so an aisle seat is a necessary bonus, and the front row veritable luxury.  Anyway, it was under two hours to Barcelona and we left late and arrived early, reasonably fresh.  Our taxi driver taking us from Barcelona airport  to Sitges was a former Grand Prix star.  Or if not, he should have been.  Exhilarating, most of the way;  just a little worrying when he took both hands off the steering wheel while going round the steep bends of a motorway access road to conduct himself whistling a flowery song called, he swore, "Viva L'Espanya".

This is positively the last event in the series of celebrations of our golden wedding anniversary back in April, reuniting all three of our adult offspring and both granddaughters, homing in on Sitges from New York, Brighton, London and Ethiopia , the latter (son) making a detour to Barcelona and Sitges en route back to Addis Ababa from meetings in New York.  Only his partner, Ethiopia country director of of a busy social work ngo, was missing, detained in Addis by her duties.  Better luck next year! 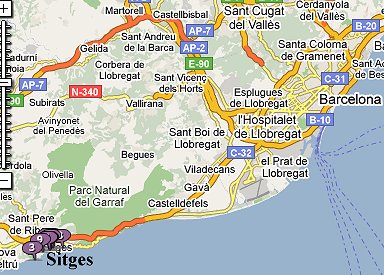 And now to see whether Spain's Nadal's hard court victory over Federer is going to be washed out, as predicted, by rain in Wimbledon, which will undoubtedly mean rain across our London home in Wandsworth too.  (In fact, to be absolutely honest, it did rain for about 15 minutes in Sitges this morning, great tropical drops, but the only real effect was to drop the temperature by a welcome couple of degrees for about half an hour.)  [Later: The final sets were being played during our extended dinner, back at the Santa Maria, as the daylight gradually faded and the bright lights began to come on.  At each heart-stopping moment in the match, diners deserted their tables in droves to crowd round a small television screen in the entrance to the next-door restaurant.  As Nadal finally won his decisive championship point, a great cheer went up from the crowd clustered round the set and the waiters and the few still at their tables clapped manically.  What a strange and rare experience for a Brit to watch a Wimbledon men's final on television in a country to which the winner belonged!]

Sitges is renowned, among other things, as the gay capital of Europe, and there's plenty of evidence for that reputation on the streets and beaches and in the shops, splendidly colourful and unselfconscious;  but there are just as many opposite-sex couples of all ages, many with small children, and even the most flamboyant gays barely rate a glance from anyone else.  In this easy-going, relaxed atmosphere — you can't even describe it as 'tolerant' when there's nothing that needs to be 'tolerated' — it's hard to imagine how solemn groups of religious zealots, especially in English-speaking countries in Africa, the US and Europe, can get so worked up about same-sex partnerships, whether of lay people or clergypersons.

And I should include a final plug for our friendly hotel, the Antemare, with its pair of swimming pools, balconies with all rooms, and notably comfortable beds.

It will be sad to leave on Tuesday.