As well as the broad implications of Tony Blair's reshuffle of 5 May, on which I have recently commented here, there are some interesting points to be made about the personalities involved — and in particular, I can't resist the challenge thrown down by Patrick and Martin Kelly to offer a view about the unexpected removal of Jack Straw from foreign affairs and his even more unexpected replacement by Margaret Beckett.

Jack Straw seems to me to deserve respect for his obvious grasp of the minutiae of his Foreign and Commonwealth Secretary's brief: it was as much a pleasure for the listener as it evidently was for Mr Straw to hear him reel off with gleeful relish the exact wording of some UN Security Council resolution in reply to a probing question from John Humphrys on the Today Programme, and to observe his expert technique for dealing with the BBC interviewers' constant attempts to interrupt him (he would pause for breath only in mid-sentence, never between sentences. Remarkably effective). He knew what he was talking about and was clearly fascinated by it, if sometimes in a tiresomely legalistic way. More importantly, in recent weeks he had begun to exhibit welcome flashes of independence in his utterances on Iran, pouring surprisingly sharp scorn over any idea of using military force (especially nuclear weapons) despite the Americans' refusal to rule out that option. Certainly he has been consistently more direct, and more reassuring, on this subject than the prime minister, who has largely contented himself with echoing His Master's Voice from the Pentagon: "There are no plans…", far short of a denial (and, incidentally, manifestly untrue). This discrepancy has inevitably prompted speculation that Blair has dismissed Straw on instructions from Washington, however expressed: Downing Street has strenuously denied that charge, but as we all know, there are more ways than one of indicating displeasure over too much independent talk from the underling of a junior ally, and it would be very hard to believe that Blair has received no vibes of concern from across the Atlantic. If there's any truth in this, it's an unqualified outrage.

However, the urge to beatify Mr Straw in his new role as victim has to be resisted, on at least two grounds. First, if he knows or even suspects that the real reason for his dismissal is American dissatisfaction with his utterances on Iran, his proper course would have been to resign and not to accept any alternative government appointment, thus keeping himself free to make public the circumstances of his departure: something that plainly ought to be in the public domain. (Even if, as seems almost inconceivable, his demotion had nothing to do with Iran or the Americans, his acceptance of such public humiliation by agreeing to take on the much less prestigious and influential job of Leader of the House of Commons hardly earns respect.)

Secondly, he has done nothing to earn public forgiveness for his deplorable role over the aggression against Iraq. He was widely rumoured to have been "unhappy" about the legality, or lack of it, of going to war without the express authority of the United Nations — hardly surprising, if so, given that his own officials, including in particular his legal advisers, are widely believed to have opposed the war and to have advised all concerned that it would not only be illegal without a 'second resolution', but also almost certain to end in tears. Straw must have known, too, that the Attorney-General's private advice to the prime minister was deeply sceptical about the legality of war without UN authority, yet he connived with Blair at the fraudulent pretence that the Attorney-General's subsequent brief parliamentary statement of the arguments adduced by some in favour of the legality of the war, even without a second resolution, represented the Attorney-General's own conveniently amended view of the legal position (which we now know it did) and reflected his original formal advice to the government (which it did not). This connivance in duplicity over a matter as grave as the illegal use of force, and this failure adequately to reflect in Cabinet and in his private dealings with the prime minister the overwhelming view of his own officials and lawyers, are black blots on Jack Straw's record. If he pressed his own and his department's view strongly and was overruled, he should have resigned, and publicly stated his reasons. Had he done so at a sufficiently early stage in the run-up to the war, it's entirely possible that Blair would have failed to get a majority in the House of Commons for going to war, and that consequently Britain would not have been involved. Blair would probably have been forced to resign, and the whole course of our nation's history in the past three years might have been different. This is a heavy burden for Jack Straw to have to carry. Some good, patient, enlightened work since then can't entirely erase that record.

All the same, I believe Straw's departure from the FCO to be deeply regrettable, especially as his successor is to be a woman of undoubted good practical common-sense and decency but with absolutely no experience of international affairs: for that lack of experience will make her warm plasticine in Blair's hands. Given Blair's careless and impetuous style of decision-making, his marginalising of experienced officials' advice, the degree to which he is in thrall to the most reactionary and wilful US President of modern times, his impatient scorn for legality and his quite unwarranted confidence in the rightness of his own instincts and judgment, the prospect of No. 10 having even greater dominance than hitherto over the country's Foreign and Commonwealth Secretary is genuinely frightening.

The other most regrettable element in this typically ad hoc reshuffle must be the arrival of "Dr" John Pooh-Bah Reid at the Home Office. [Pooh-Bah: " A pompous ostentatious official, especially one who, holding many offices, fulfills none of them" — The Free Dictionary.] I can shed no tears over the belated and clumsy dismissal of Charles Clarke, a 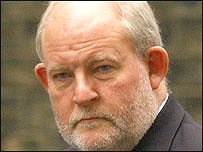 serious man reputedly concerned about civil rights in a way that David Blunkett was not, but who was too weak to stand up to the prime minister, the police and security services, the prison officers' union or his own Home Office officials with their incessant demands for ever more sweeping powers for the state at the expense of the liberty of the citizen. The irony is that the immediate cause of his downfall was not his failure to defend our historic rights and freedoms against the assaults of the authoritarians, nor even his failure to control and manage his own department or to find out for himself which of its statutory duties his officials were failing to perform, as a competent and responsible senior minister ought to have done: instead, he was brought down by the prime minister's cowardly failure to dispel a tabloid-driven and completely false impression that Clarke had in some way caused a national crisis by debouching onto our streets a horde of foreign rapists and murderers, all of whom he should have summarily deported. In fact, of course, the Home Office's failure to 'consider' for deportation foreigners who had served a year or more in prison, and had been released, left the situation exactly as it has always been: foreigners, just like British citizens, are released after serving their sentences, and are free (if legally in the country) to 'walk the streets' just like anyone else. If the fear is that almost 60 per cent of them go on to commit fresh offences, the remedy is obviously to do something to educate people in prison, give them job skills and get them off drugs: the fact that a small proportion of those concerned are foreigners is neither here nor there. So Clarke had to go, even if for all the wrong reasons.

But if one were to draw up a list, necessarily very short, of Labour parliamentarians most likely to stem the flow of new, panicky home office legislation on crime and terrorism, to allow the department to get on with its existing job: most likely discreetly to drop the nonsensical and sinister project for ID cards and a national database: most likely to agree not to renew the operation of the Control Orders regime and to limit drastically the scope of ASBOs: most likely to resist Downing Street's crazy and illegal demand for the automatic deportation of all foreigners convicted of any theoretically imprisonable offence, regardless of individual circumstances: most likely, in short, to begin to retrieve our civil rights and to resist their further erosion — surely the name at the bottom of that list would be that of "Dr" John Reid, whose brief inglorious reigns in seven previous Cabinet posts give absolutely no indication of sensitivity to civil rights or other humanitarian concerns. From flawed frying-pan into an uncontrollable fire!

And, finally, unlike Martin Kelly's comment mentioned earlier, I can find nothing in this reshuffle to suggest that it is designed to smoothe the eventual transition from Blair to Brown, or that it represents a movement to the left. If a transitional ministry had been intended, it's hard to see how it could have been done without any consultation with Gordon Brown — and despite a great deal of obfuscatory waffle on the Chancellor's part in his interview earlier today with Andrew Marr on the BBC programme Sunday AM, he could not in the end avoid making it clear that he had indeed not been consulted, except in the most general way. Moreover, Brown's allies involved in the reshuffle all seem to have been put into notably controversial and success-resistant appointments. It would be difficult to see Reid's arrival at the Home Office as a movement either to the left or towards a peaceful transition to a new Brown ministry; and the same goes for the change at the FCO, designed to remove any threat of independent challenge to Downing Street in the field of international affairs. Almost everything about the reshuffle is callous, cynical, clumsy, reactive, and unrelated to any over-arching strategy other than prolonging indefinitely Tony Blair's tenancy of No. 10. In practice it seems likely to create more problems for him than it solves. It has made him some potentially dangerous enemies. Now we'll see what they are made of.