The Tory Davids face to face

I suppose the most significant thing about the confrontation between the two Tory leadership contenders, old[ish] David Davis and young[er] David Cameron, on last night’s BBC television programme Question Time was that it took place at all, a novelty in British television politics.  Both the Davids enthusiastically endorsed the demand of the third David (Dimbleby, their moderator) for whoever emerges in December as the new leader of the Conservative Party to  have the chance to debate whoever is by then leader of the Labour Party on television during the election campaign.   Since both will still be newish in their jobs, they might even agree on this occasion to debate each other:  an incumbent and established prime minister usually has no reason to award his opposite number the opportunity to gain massive publicity and to be represented publicly as the equal of the head of government by agreeing to debate him on television. 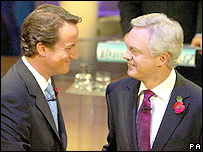 If neither David slew his Goliath, that could be because Goliath (aka Kenneth Clarke) was eliminated by the Tory MPs at the first round of the contest and isn’t on offer to the party worthies who now have to choose between Davis and Cameron.  Each of the Davids evinced warm approval of the other, enthusiastically agreeing with almost everything the other said (‘we’re both Tories’).  Cameron earnestly defended himself for declining to specify any particular policies that he would adopt if elected as leader: we would look foolish, he insisted, at the election in three years’ time if we had adopted a whole raft of policies now (although why sound policies whould invite ridicule because of the passage of time was not made clear).  Davis, with equal enthusiasm, leapt on this as the defining difference between Cameron and himself, claiming to have policies for all occasions, all available on demand.

The depressing thing was the obnoxious or absurd character of such specific policies as either candidate ventured to espouse, in each case with the eager support of the other.  By far the worst of these was the demand by Davis, who said he was not talking about quitting the EU, for Britain to take back from the EU powers on fishing, immigration and social policy, including union law and labour regulation.  Cameron agreed.  EU ‘red tape’ (along with ‘government waste’ an old traditional Tory hobgoblin since the beginning of time) was severely damaging British companies’ competitiveness and we should reclaim national control from the Bad Fairy in Brussels. And what, David3 politely enquired, if our EU partners declined to return these powers to us?  Then, explained DavidD (recalling that he had once been the Minister for Europe, winning at that time the nickname Monsieur Non, ‘for good reason!’), resistance to our demand would precipitate a Crisis.  Well, that’s one way to get what we want out of Johnny Foreigner, I thought:  if there’s one thing the Frogs and the Boche don’t like up ’em, it’s a Crisis.  Europhobia, lightly disguised as Euroscepticism, lives on even among the up and coming young Tories (and they don’t come much younger or more up and coming than DavidC).  No wonder the MPs ditched Ken Clarke before the baying Tory packs in the shires had a chance to tear him limb from limb.

And talking of baying hounds, the Davids also cordially agreed, in reply to a question from a purple-faced Tory in the audience, that each, if elected leader and then elected to lead a Tory government, would allow a free vote in the House of Commons on whether to repeal the ban on hunting with dogs:  and, said DavidD smugly, it’s not hard to guess how the vote would go in a House with a Tory majority.  So take heart, you aficionados of cock-fighting, bear-baiting and bull-fighting out there: your time may yet come.

There were occasional flashes of decent liberal opinion.  DavidC put in a good word — two, actually —  for action to deal with poverty in Africa, a novel proposition coming from a Tory.  Both Davids opposed the government’s current wheeze under which the cops and spooks would be able to bang up a terrorist suspect, without even charging him, for up to three months;  but both seemed willing to approve an extension of the present 14-day limit if a ‘consensus’ could be reached on a period somewhere between 14 and 90 days (Davis murmured ’28’ in a speculative way at one point, which is where the smart money seems to be).  Both agreed that same-sex partners should enjoy legal rights akin to those enjoyed by married couples, although both performed the usual ritual obeisance to The Family, its values. Neither had a good word to say for drugs.  DavidD made a great show of refusing to make political capital out of the rumoured druggy student past of DavidC.  DavidC poured righteous scorn on the notion that young red-blooded men should be constrained in their behaviour by the possibility that they might one day become politicians (not one of the reasons for refraining from drug-taking that springs immediately to mind, but I suppose any reason is better than nothing).

So who won?  Only a grass-roots Tory can reliably answer that, for the Davids are competing at this stage for the votes of members of Conservative Associations around the country (or at any rate where there are any), not for the support of the likes of the rest of us.  Perhaps whichever wins in December will thenceforth tack towards a more centrist position in readiness for mortal combat in two or three years’ time with Gordon Brown (or David Miliband, or Hilary Benn, or David Blunkett, or Tony Blair): but I wouldn’t bet on it.  Davis is reputed to be the candidate of the right wing in this contest, and he understandably said nothing to undermine that reputation.  Cameron is the candidate with Youth, Charisma, and No Policies, and similarly said nothing to disavow those considerable qualities, apart from boyishly pointing out that if his youthfulness was to be held against him, it wasn’t something that would last for ever.  Nor did he make any obvious bid for the votes of the Tory left: perhaps there aren’t any .  (Cameron put on a show of indignation at a suggestion from DavidD that he was in some way the heir to Tony Blair, in itself a rather suggestive point.)

At the end of a pretty dispiriting hour, the only obvious conclusion was that we’d all just have to go on voting Labour, however hard Tony Blair tries in his declining political years to persuade us otherwise.  But don’t bet your children’s inheritance on David the Younger not moving into No. 10 in or around 2009.  Stranger things have happened.