David Blunkett’s downfall: the texts and the timing

Unaccustomed as I am to feeling even a sneaking sympathy for the appalling Mr Blunkett, probably the worst and most illiberal Home Secretary in my longish lifetime, I’m bound to confess that it’s easy to see how he might have misunderstood the rules on seeking advice from the ‘independent Advisory Committee on Business Appointments’ on taking up appointments after leaving ministerial office, the crux of his current difficulties:

Ministerial Code: A Code of Ethics and Procedural Guidance for Ministers’ [sic]

5.1 Ministers must ensure that no conflict arises, or appears to arise, between their public duties and their private interests, financial or otherwise.
….
Acceptance of appointments after leaving ministerial office

5.29 On leaving office, Ministers should seek advice from the independent Advisory Committee on Business Appointments about any appointments they wish to take up within two years of leaving office. This is not necessary for unpaid appointments in non-commercial organisations or appointments in the gift of the Government, such as Prime Ministerial appointments to international organisations. Although it is in the public interest that former Ministers should be able to move into business or other areas of public life, it is equally important that there should be no cause for any suspicion of impropriety about a particular appointment. The Advisory Committee may recommend a delay of up to two years before the appointment is taken up if:
a. an appointment could lead to public concern that the statements and decisions of the Minister, when in Government, have been influenced by the hope or expectation of future employment with the firm or organisation concerned;
b. an employer could make improper use of official information to which a former Minister has had access.  [My emphasis — BLB]

I am writing to you, as I do to other Ministers who leave the Government, to advise you how to contact the Advisory Committee on Business Appointments if you wish to seek our advice on any appointment outside Government.

You may recall that the Ministerial Code – A code of conduct and guidance on procedures for Ministers (July 2001) – states that “on leaving office Ministers should seek advice from the independent Advisory Committee on Business Appointments about any appointments they wish to take up within two years of leaving office, other than unpaid appointments in non-commercial organisations or appointments in the gift of the Government …” (paragraph 140)….

I wrote to you on 21 December to let you know how to get in touch with us if you wished to consider taking up any employment after leaving the Government. I enclose a copy of my letter for convenience.

The system under which former Ministers can seek our advice about outside appointments is a voluntary and advisory one, although the Ministerial Code does state that they should do this. … in accordance with our Guidelines we would normally expect a former Cabinet Minister to wait at least three months before taking up an outside appointment.

… In view of the possibility of a misunderstanding on your part in this case, I thought it right to let you know that, if asked about your appointment with Indepen, we would need to say that we had not been consulted about it.

The Committee is always prepared to offer advice retrospectively, but it would be clear from our report that it was not sought until after the event….

Thank you for your letter dated 2nd March. You are indeed right that there has been a misunderstanding. It was my belief that I should seek your advice if I had any doubt about the nature of the employment and its connection with my role as a Government Minister. My apologies for not realising that, on a voluntary basis, I should have consulted you irrespective of this. …
If there is a problem I would happily meet you but I am also please (sic) to take any advise (sic) on whether you believe I have broken the rules….  [My emphasis — BLB]

It’s hard to avoid the suspicion that Lord Mayhew, or whichever Committee functionary drafts his letters for him, was guilty of mealy-mouthed drafting in failing to make clear the crucial distinction between seeking the Committee’s advice (which is an obligation) and acting on that advice (which, weirdly, is optional).  As Sir Alistair Graham, chairman of the committee on standards in public life, has made brutally clear:  "undoubtedly there was a breach of the ministerial code", because Mr Blunkett had not sought the committee’s advice.  By writing to Mr Blunkett the fatally ambiguous sentence that "The system under which former Ministers can seek our advice about outside appointments is a voluntary and advisory one" (even though it’s immediately qualified),  Lord Mayhew left the courtroom door wide open for both misunderstanding and a means of escape. 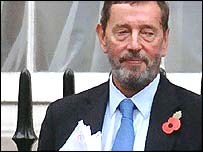 However, there’s a problem for Mr Blunkett over the timing of his correspondence with Lord Mayhew and that of his subsequent action in taking another directorship, again without seeking the Committee’s advice.  As The Times article icily puts it:

The last letter was dated on [sic] March 15.  Yet in April, Mr Blunkett repeated the mistake by taking a directorship with DNA Bioscience without consultation.

He’s going to have his work cut out wriggling out of that one.  This is surely a crass misjudgement too many.  David Blunkett has lost his credibility, convicted himself too many times of failures of judgement in his private and public lives to retain public confidence in his judgement as a senior Cabinet minister, and by his own ill-judged activities made himself a figure of fun.  He should resign, or be sacked.

There are two ironies, though, in all this.  First, that Mr Blunkett’s ministerial career should have been ruined, not by his disgraceful record as Home Secretary, but by constant ludicrous misjudgements in both his private and his public life;  and, secondly, that Tony Blair, who a couple of years ago acted in such treacherous haste to dismiss his close ally and friend Peter Mandelson before, rather than after, taking the trouble to establish whether he had done anything wrong (he almost certainly hadn’t), should allow Blunkett to cling to his Cabinet ministerial job long after the established facts have made it abundantly clear that he ought to go.  Loyalty, even selective loyalty, is one thing;  upholding high standards of probity in public life is quite another.

Update: These remarks were written on the day before David Blunkett’s resignation;  the comments below were written after it.