When is a Queen not a Queen?

Camilla is the Princess of Wales, and when Prince Charles becomes King, Camilla will be Queen, unless parliament decides otherwise — which it won’t.

Until now the royal family’s official line has been that when the Prince of Wales becomes King, his wife, who is currently supposed to be  — indeed is — called the Duchess of Cornwall, will be known as “Princess Consort”.  But today, Prince Charles was not entirely certain that this would be the case:

Asked in an interview on US channel NBC whether the Duchess of Cornwall could ever become Queen Consort, he initially stumbled over his answer.  He then added: “We’ll see won’t we? That could be.”  (http://www.bbc.co.uk/news/uk-11800849)

(The clip on that website of Prince Charles “stumbling over his answer” is a royal collector’s piece, incidentally, although unfortunately accessible only to viewers in the UK, apparently.) 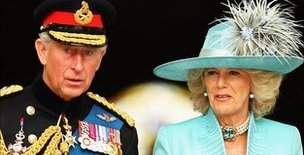 This excessive coyness about the unfortunate Camilla’s titles stems from The Firm’s belief, whether or not well founded, that public opinion would not be able to stomach the assumption by Camilla of the title “Princess of Wales” which in the eyes of much of the world irretrievably belongs to the late and now sainted Diana, the Prince of Wales’s first wife.  Similarly, the nation, still supposedly grieving for Diana, is thought to be unwilling to accept the idea that when her husband becomes King, the woman who succeeded — some would say supplanted — her, Camilla, should become Queen.  Hence the fancy titles devised for her:  Duchess of Cornwall, eventually to be Princess Consort.  But Charles’s agonised hesitation over the answer to the question whether Camilla would one day be Queen reveals that, as generally supposed, he hopes she will.  And why not?

All this flies in the face of reality.   As the wife of the Princess Prince[1] of Wales, and in the absence of legislation by parliament to the contrary, Camilla is the Princess of Wales, whatever she has been told to call herself.  And if and when her husband becomes King, assuming that Camilla is still married to him at the time, as the King’s wife Camilla will indeed become Queen — not Queen regnant like Queen Elizabeth II, who reigns in her own right, but Queen consort as wife of a reigning King.  The only way of preventing this happening would be by passing an Act of Parliament declaring that on Charles’s ascent to the throne, Camilla shall not become Queen.  Such a law, which would require the consent of and possibly parallel legislation by the 15  other countries (plus the Cook Islands) of which the UK’s monarch is also the head of state, is clearly inconceivable.

No wonder Prince Charles was so comically flustered when asked that seemingly innocuous question. Had Rory Bremner caricatured the heir to the throne in such a way, we would all have said that he had gone over the top.  By pretending that the plain facts are not facts but what the royal family, with the connivance of successive British governments, wants them to be, all because of their fear of public opinion and their continuing terror of Diana’s menacing shade, the royals have got themselves into a right old muddle.  Camilla, Princess of Wales and Duchess of Cornwall, seems a perfectly unobjectionable lady doing her job, such as it is, with considerable grace.  When (and if) she becomes Queen, there seems no possible reason why she should not be formally recognised as such; indeed, to pretend that she is not the Queen when she manifestly is, will be to humiliate her even more than by the insulting refusal to recognise her now as Princess of Wales.  Cowardice of this order will do much more damage to the standing and survivability of Britain’s monarchy than a robust acceptance of reality.

At a time when the livelihoods and homes of several millions of Britons are under threat from the exaggeration and manipulation of a manageable economic and fiscal problem by a group of ruthless ideologues (i.e. H M government), the question of the precise titles of a middle-aged woman married to a vaguely eccentric prince may justifiably be regarded as light relief, just as the forthcoming nuptials of the prince’s son and heir, greeted on camera by the prince in question with a spectacular lack of enthusiasm, can be seen as a moderately welcome distraction from the gritty reality of Cameron’s, Clegg’s and Osborne’s Britain.  Let us enjoy it while it lasts.

[1] Please see comment by Phil, below, to whom thanks for pointing out my typo!

Update, 20 November 2010:  I have added a detailed separate comment below in reply to the interesting questions raised by Pete Kercher:  please see https://barder.com/2978/comment-page-1#comment-95491.