Abortion and the viability test fallacy (with update 11 May 08)

A month or two ago I submitted a letter to The Observer about abortion, pointing out that the pro-choice lobby (those in favour of recognising women's right to choose what to do about an unwanted pregnancy) was making a big mistake by tacitly accepting the anti-abortion people's proposition — that abortion should be allowed, if at all, only up to the point when the foetus has developed sufficiently to be theoretically viable outside the womb: the viability test.  The Observer didn't publish my letter so in March I put it on this blog instead.

Later, on 27 April 2008, The Observer published a letter (not apparently available online) about abortion signed by David Steel (Lord Steel of Aikwood) and 27 others — a letter to be taken seriously in view of Lord Steel's status as the father and prime mover of the great abortion reform Act of 40 years ago, which at last legalised abortion in certain defined circumstances, and largely put the back-street abortionists out of business.  The Act licensed abortion up to the 28th week of a pregnancy, the point at which the foetus was regarded at the time as becoming viable.  But, in the words of David Steel in an article in The Independent newspaper on 30 April 2008, reflecting the same approving assumptions about the viability test as those made in his Observer letter three days earlier, —

The one thing we [sic] did change since 1967 was that we agreed in 1990 that the presumption of viability at 28 weeks was out of date and should come down to 24 weeks. The BMA, the Royal College of Obstetrics and Gynaecology and the national body representing neonatal paediatric specialists have now, on the basis of powerful recent research, concluded – and they are backed up by a House of Commons Science and Technology Committee report – that there has been no reduction in the threshold of viability to below 24 weeks. The expert medical professional bodies are of the view that there should be no further reduction in the upper time limit and I believe that politicians should be guided by them.

In response to the Observer letter (and the Independent article which made the same point) I had another go at a letter for publication, with the same result (i.e. this one wasn't published either!):

David Steel (letters, 27.04.08) has done more than anyone else to civilise our abortion law, so it's especially sad to see him and 27 others relying on the deeply flawed foetus-viability test as the main reason for keeping the present 24-week cut-off point for legal abortions.

There's no basis in ethics or logic for the claim that once a foetus achieves theoretical viability outside the womb, aborting it should be forbidden: why should viability suddenly invest the foetus with the rights of a developed person (which it isn't) and suddenly revoke the right of the mother to control of her own body?

Anyway, viability is a fluid concept, varying from person to person and place to place: medical science will inevitably make viability possible earlier and earlier, eventually to the moment of conception, at which point applying the viability test will make all abortion illegal once again.  Changes in medical science can't affect the moral status of a foetus, nor deprive the mother of her rights.  We really need to abandon any association between viability and the time when abortion ceases to be permitted; otherwise Lord Steel's great achievement will soon come to nothing.

Those, including pre-eminently the Roman Catholics, who want abortion banned altogether, opportunistically latch on to the viability test (which is anyway inconsistent with their own theological position) as a way to reduce bit by bit the period during which abortion is legally permitted, knowing that as advances in medical science makes a foetus 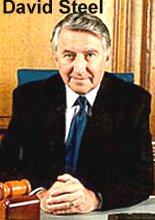 theoretically viable outside the womb at an ever earlier stage of its development, eventually permitting a fertilised human egg to be developed in the laboratory immediately after conception, the inevitable outcome will be the prohibition of all abortions at any stage of a pregnancy.  We shall be back to square one, back-street abortionists and all.  Yet (as I pointed out in my blog post of 16 March) David Cameron for the Conservatives, the responsible Labour minister, and now David Steel himself, have all committed themselves to this fallacious and retrograde principle.

Acceptance of the viability test is logically misguided and extremely dangerous in practice. Rejecting it entails abandoning an assumption which, almost unbelievably, has guided policy for both the pro- and anti-choice camps for forty years.  It's surely time for those who believe in a woman's right to control over her own body to jettison it before it's too late.  We should be guided, not as Lord Steel proposes by doctors or scientists, and still less by the priests (none of whom is any better equipped to make a judgment on the issue than anyone else), but by our liberal and ethical principles, if we have any.

So the Mail prints pictures of thumb-sucking foetuses with stories of four miracle babies that survived extreme premature births. Never mind that the whole notion of viability has no rational connection to any limit on the date for abortions: from the moment of conception every zygote is potentially viable. But "pro-lifers" reckon if they can win the argument in principle that a "viable" foetus can never be aborted, then some day, when the science permits, they will win an outright ban.

Exactly so.  Yet the swelling discussion of this issue on radio and television and in the print media, as the parliamentary debate draws near, is almost entirely conducted on the assumption that the viability test is decisive.  It's mystifying that even the pro-choice lobby — with a few valiant exceptions such as Polly Toynbee — seems content to fight this battle on ground of the mediaevalists' choice.