There’s unnecessary confusion in the media, especially in television current affairs and newspaper review discussions, over bird flu (rather pompously referred to by some as ‘avian’ flu).  The confusion sometimes amounts almost to obfuscation.  I’m no expert (as this piece will probably make all too clear), but there seem to be two quite separate dangers, one limited and the other almost unlimited, but both too often rolled by commentators into one, thus exaggerating the first and under-stating the second.

The first is the danger that some humans may catch bird flu from contact with an infected bird or its droppings.  This would certainly be serious for those catching the disease, for poultry farmers in the affected area(s), and, in the worst case scenario, for consumers of chicken and eggs and other poultry meat, namely almost all of us.  But since in our kind of society relatively few people live in such close proximity to potentially infected birds as to be vulnerable to catching the infection from them, and since so far the evidence suggests that very few infected birds — perhaps just one — have so far reached our shores, not many people in Britain could expect to be exposed to major risk, and even if a bird-to-human infection does break out, it ought not to be impossibly difficult to contain it both geographically and in its consequences.  There should be, and it seems that there is, advance planning going on to deal with this kind of situation, and it ought not to be exaggerated in order to sell newspapers or television advertising time.

The second danger is altogether different.  Most scientists with specialised knowledge of these matters tell us that sooner or later (although it’s impossible to predict when) the virus, once caught by a human or humans from a bird (as has happened in several countries in Asia and elsewhere), will mutate into a new virus capable of transferring infection from one human to another: a pandemic[1].  Past experience shows that such a virus, once mutated in this way, will be exceptionally virulent and easily caught, that it will be fatal in a high proportion of cases, that hundreds of thousands of people in Britain alone may die of it within a quite short space of time, and that it will not be possible to produce a single vaccine which would give effective protection against it until the virus has mutated and the first infected people have been identified.  Even then, it will be up to four to six months before the vaccine can be developed, mass-produced, and distributed to the most vulnerable groups — by which time very large numbers of people will already have died from it.  This is not a current danger, because so far as we know the virus has not yet mutated.  It might be many years before the mutation occurs, or it might occur next week.  The greater the number of people infected from birds, the likelier it is that the virus will mutate relatively quickly into a version that passes from human to human.

The media reaction to the second danger, the pandemic, has generally been first to confuse it with the first danger and then either to pooh-pooh it as scare-mongering, or to dismiss it with a shrug as something that might well be ghastly if it happens, but about which there’s nothing to be done, so that there’s no point in worrying about it.  Both reactions seem wrong-headed.  If and when the pandemic occurs, it may be difficult to over-state its implications and the numbers and categories of people likely to be affected.  Moreover, action can be taken, and is being taken, to minimise the impact of the pandemic by ensuring in advance that drug companies are ready at very short notice to develop the relevant vaccine and to put it very rapidly into mass production for distribution to people most at risk (whether in the UK or overseas), and eventually for a high 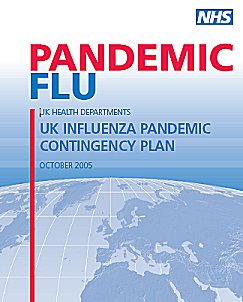 proportion of the UK population. There is an enormous amount of clear and vital information on the excellent Department of Health Pandemic Flu website, ranging from short summaries of the situation, prospects and measures being taken, in leaflet form, "Pandemic Flu: Key facts" (pdf) to an encyclopaedic "Pandemic Contingency Plan" with a wealth of scientific, legal, social and medical detail about what is likely to happen and what can (and will have to) be done to minimise the casualties, including wide-ranging restrictions on ordinary social and other activities.

One major piece of essential preparation is collaboration with drug companies to minimise the lead time between the start of the pandemic and the availability of a specific vaccine to inhibit its spread and reduce its impact, initially on most vulnerable health and other workers, then on other groups found to be most vulnerable.  In the words of the Contingency Plan:

Once WHO has recommended that production of a pandemic vaccine proceeds, manufacturers will need to switch from seasonal influenza vaccine production. We are working closely with other countries, the World Health Organization, the European Commission and manufacturers to ensure that a vaccine can be developed as quickly as possible once a pandemic flu strain emerges and to put arrangements in place to ensure production of vaccine for the UK population. … Even with advance work to improve our preparedness for vaccine production, the lead time before a new vaccine becomes available in quantity is likely to be at least 4-6 months. There may be no vaccine initially and then availability will depend on production rates. At the same time, international demand for vaccine will be high. Vaccine will have to be distributed equitably and administered to pre-determined priority groups first, according to nationally agreed recommendations. The Department of Health (England) will lead on purchasing and supplying a pandemic vaccine on behalf of the whole UK, liaising with the devolved administration Health Departments.

Already contracts are being drawn up and negotiated with drug companies to ensure that some vaccines and antiviral agents will be available before the pandemic even though their effectiveness will be uncertain until the pandemic virus is isolated and identified:

The Department of Health recently announced its intention to purchase 2 million doses of H5N1 vaccine. The vaccine will be suitable for research purposes, and could be offered to frontline healthcare workers if the risk of a pandemic increases. Production capacity: The capacity for vaccine production will depend upon many factors. The overall world-wide manufacturing capacity is based on the demand for annual routine influenza vaccines. This varies considerably between countries. National immunisation policies are based on selective immunisation of identified risk groups. The UK achieves high coverage in the main risk group (those aged 65 and over) and delivers nearly 13 million doses of trivalent influenza vaccine each year (i.e. about 20-25% of the total population).

But even with all possible preparatory work, the death toll from the pandemic is likely, on past form, to be extremely severe and perhaps catastrophic, with an immense impact for many years on the survivors world-wide:

The mortality worldwide in 1918-19 has been estimated to be upward of 20-40 million. In some areas this reduced life expectancy by around 10 years. In England and Wales, 200,000 excess deaths [i.e. deaths in excess of what would normally be expected] occurred of which 150,000 were ascribed to influenza – just over 3,000 deaths from influenza per million population were recorded in 1918 and 1,170 per million in 1919.  In 1957, which was on the whole a milder illness, the global death toll was estimated to be around 2 million. An excess 30,000 deaths occurred in England and Wales of which 6,716 were ascribed to influenza itself. Estimates ranged from 1.3 to 3.5 deaths/1,000 cases. An estimate from 29 general practices was 2.3 deaths per 1,000 cases attended. Two thirds of the deaths were in people aged over 55 years.

The evidence so far seems to confirm that everything that can be done is being done.  Some of the Contingency Plan’s warnings convey a kind of gallows humour:

Services such as death registration and funeral directors will have an increased work load.

Difficult and controversial decisions will have to be made once the pandemic begins, probably initially in a developing country where many people have been infected by birds and where there is little or no capacity for producing or distributing vaccines, even when the new human-to-human virus has been isolated and identified.  Effective vaccination of even a fraction of, for example, nearly 130 million Nigerians would be a huge task requiring energetic international action and funding;  and the issue of priority as between the provision of scarce vaccines to millions of immediately vulnerable Nigerians and to countries such as the UK which would start to experience the pandemic only later would be intensely difficult to resolve.

Meanwhile it makes sense to assume the worst and to start to familiarise ourselves with the measures of personal hygiene and social control that will become necessary.  That Department of Health website is a very good place to start. But don’t listen to those glib commentators in the press and on television and radio who say that it’s all scaremongering.  This is sooner or later going to be a very serious crisis, and possibly a huge catastrophe.

[1]Pandemic: "Of a disease: Prevalent over the whole of a country or continent, or over the whole world. Distinguished from epidemic, which may connote limitation to a smaller area."  OED, second ed.

Update:  Since writing the piece above, I have read the front-page story in today’s London Sunday Times under the banner headline:  Schools will shut in 100,000 flu death fear, credited to the keyboard of the newspaper’s Political Editor, who doesn’t seem to have consulted the Department of Health website, extensively quoted above but not in the Sunday Times, before writing it.  Why Mr Cracknell should have singled out the possible closure of schools from among the numerous measures contemplated in the event of a pandemic in order to minimise the spread of the infection is inexplicable, at any rate by me;  the DoH Contingency Plan clearly spells out the pros and (weighty) cons of closing schools and rightly concludes that such decisions would have to be taken at the time in the light of circumstances.  The same Sunday Times article also seems to confuse antiviral drugs with vaccines.  The story seems designed to arouse fear rather than to provide information;  or, if not designed with that purpose in mind, likely to have that effect.  And on the front page!