Today's Guardian treats us to a précis of an exceptionally emetic[1] piece in Comment is Free (the giant Guardian blog) by Ruth Lea, formerly of the Institute of Directors and currently director and economic adviser at the Arbuthnot Banking Group (which "offers outstanding Private Banking and Wealth Management services") and a governor of the London School of Economics.  Ms Lea explains 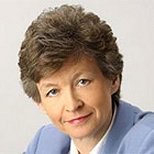 that the current strike by public sector workers against the government's pay deal, which represents a cut in their standard of living in real terms, is unjustified:  any pay award above the level of inflation just leads to even higher prices, you see, so any such pay increase is bad news for all the rest of us.  Why single out public service workers for pay cuts as part of the government's attempts to contain inflation?  Because there's more job security in the public sector than in the private sector (a woefully out-of-date assertion), and also because above-inflation awards in the public sector will incite private sector workers to demand similar inflationary awards (which presumably wouldn't have occurred to them without those wicked nurses and teachers and postmen setting a bad example):

And – surely the clincher – council staff workers must realise that they will be condemned as irresponsible and unfair if they push for high pay awards when their private sector friends may be losing their jobs.

Ms Lea's article (worth reading in full on CIF, if you have a sufficiently strong digestive system)  prompts at least two questions:

First, is she really unaware of the intense resentment among public sector workers, many of them among the lowest paid in the land, over the Government's attempt to place the whole burden of reduced living standards at a time of mounting inflation on them, when there is not the slightest effort to spread the burden more fairly by using the tax system to curb monstrously inflated salary increases and astronomical bonuses, often quite unrelated to performance and way above the level of inflation, awarded to one another by her friends in the City and business?  Or is she aware of this (wholly justified) resentment, but can't understand it?  Or does she fail to acknowledge it simply because it would spoil her self-serving argument?  Her failure even to mention it does leave rather a large hole in her treatment of the issue.

Secondly, what on earth does the Guardian think it's doing publishing this reactionary rubbish, not once but twice —  in print, and in Comment is Free?  There are plenty of far right-wing media outlets only too happy to host this kind of stuff in defence of Ms Lea's fellow-bankers and their living standards.  God forbid that these people's inalienable right to an annual hike in the salaries and bonuses that they pay each other should be threatened by a pay award to rubbish collectors and librarians in line with, or even above, the level of inflation, to ensure that at least they don't continue to get a little poorer every year.

Old-fashioned Old Labour class envy?  No:  just an invitation to recognise the indefensible unfairness of government tax and inflation policy — the policy, so help me, of a Labour government (best read with a Kinnockian Welsh accent[2]).

[2] 'Kinnock raged at Hatton and Militant, saying: "You end in the grotesque chaos of a Labour council — a Labour Council — hiring taxis to scuttle round a city handing out redundancy notices to its own workers." '  http://tinyurl.com/68y6l8 and http://www.psr.keele.ac.uk/area/uk/pebs/lab87.htm