Where’s Labour when the UK may be about to break up? Here’s a modest proposal

Of all the many opportunities now being missed by the Labour party for a vigorous, radical campaign to win over solid popular support, one of the saddest is Labour’s silence on the real possibility that in barely a year’s time, on Thursday, 18 September 2014, our fellow-citizens in Scotland may vote to leave the United Kingdom to become an independent state.  Current polls show a clear majority of Scots opposed to independence, but much can change in a year, and not that many Scots seem content with the status quo.  A Tory-led government at Westminster, with virtually no Conservative party support in Scotland, is waging a class war against the poorest and most vulnerable in the country, outraging widespread progressive opinion in Scotland.  The Tories are appeasing their own loopiest supporters by increasingly putting British membership of the European Union — much more valued in Scotland than in England — at risk.  The independence campaign is led by probably the most skilful and charismatic politician in the UK,  Alex Salmond.  Blandly assuming that the referendum due next year will come down against independence, and doing nothing at all to persuade the Scots to vote accordingly apart from nit-picking over the small print of the independence campaign, is a reckless gamble with the future of our country.

Yet there’s no sign of a Labour strategy aimed at offering Scotland a worth-while alternative to independence that could command support both in Scotland and in the RUK (rest of the UK).  The Tories have clearly written off Scotland and have no policy for its future apart from complacently assuming that Salmond will lose his referendum and that the Scots will be content with the minor improvements to Scottish devolution in the Scotland Act 2012.   The LibDems have a radical and forward-looking policy for Scotland and for the constitutional future of the UK, but no-one else seems to take any notice of it or to take it seriously.  A bold Labour policy, supported by the LibDems and offering a brighter constitutional future for the UK, including for Scotland, would fill a yawning vacuum.  It could form one of the key elements in an imaginative Labour programme offering an optimistic long-term alternative to the break-up of the UK, leaving a sadly diminished little England searching for a role with Wales and Northern Ireland in tow, as envisaged in a striking recent Observer article by Henry Porter.  Deferring the unveiling of such a programme until the eve of a May 2015 general election will be too late: by then the Scots will have had their referendum and the die may have been irrevocably cast.  The need is for a brave Labour initiative within at most a few weeks. 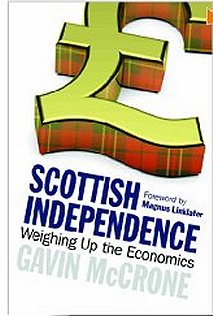 English lethargy in the face of the threat to the integrity of our country ought to have been brutally shaken by the publication of an important new book, Scottish Independence: Weighing up the Economics, by Professor Gavin McCrone, a distinguished former public servant and academic economist (full disclosure: Gavin McCrone is one of my oldest friends).  This book is an invaluable guide to the main issues, political as well as economic, arising from the choice facing Scots next year. Short, pithy, commendably cheap, available as an e-book or paperback, written in clear English, accessible to the ordinary reader as well as to trained economists, amply supported by facts, figures and statistics, Scottish Independence could well have been published in a well-known series of handbooks and re-named Scottish Independence for Dummies.  It ought to be required reading, not only for Scottish voters before their referendum next year, but also for everyone in England (and the other two UK nations) with an interest in the future of the United Kingdom.  It has been widely discussed in the Scottish print and electronic media but, inexplicably, it has so far barely been noticed at all in England.

Professor McCrone, who sensibly refuses to disclose his own referendum voting intentions and remains resolutely impartial throughout his book, discusses the numerous questions that would need to be answered before Scotland could become independent, if that’s what the Scots vote for in 2014: could an independent Scotland continue to use the pound sterling and if so how much influence could it have on its own monetary and fiscal policies?  on what basis would Scotland take on a fair share of the UK’s income from North Sea oil and of the UK’s national debt? could an independent Scotland afford to bail out its very large banks if they were to fail again in future? what would be the implications for both Scotland and England of Scotland going it alone on renewal energy policy?  would Scotland need to apply for EU membership as a new state? what if England voted to leave the EU in the in-or-out referendum threatened by Mr Cameron, but Scotland, having voted to remain part of the UK, voted massively to remain in the EU?  if Scotland applied for EU membership as a new state, would other EU member states with their own internal secessionist movements (Spain and Belgium, for example) be tempted to veto the Scottish application for fear of setting an awkward precedent?  would Scottish EU membership require a new EU treaty whose ratification would trigger referendums in some EU countries, referendums that might well go against Scotland? would Scotland, if admitted as a new member to the EU, inherit a share of the UK’s EU rebate? would Scotland, as a new member, be required by current EU doctrine to join the Euro and the Eurozone, and/or the Schengen Agreement – which would mean immigration controls on the border with England?

Professor McCrone suggests possible answers to all these questions, stressing that if the Scots vote for independence, many of the most vital questions would have to be negotiated with the government at Westminster before independence could be achieved, and and that it’s impossible to predict what the outcome of those negotiations would be; and that others would fall to be negotiated with the whole of the EU, including the RUK, both before and after independence, the outcomes in each case similarly unpredictable.  Professor McCrone notes that some of the principal questions have apparently not been discussed, even in a preliminary way, between Edinburgh and London or between Edinburgh and Brussels.  It looks as if Scottish voters will have to make their decisions for or against independence in just a few months’ time without having the slightest idea how these questions, fundamental to their own future welfare and security, are likely to be answered.  A pig in a poke indeed.

In a striking passage in his book, McCrone warns that

If independence is rejected, … there is a real danger that politicians at Westminster and officials in Whitehall may think that they can put away the files and not worry about Scotland any more. Proposals for increased devolution might then be shelved. That is quite a likely outcome but it would be a huge mistake.  It would probably mean that the next time there was a big surge in support for independence for Scotland, maybe in ten or twenty years’ time [Note by BLB:  I predict that it would occur much sooner], it would carry the day in a second referendum.  That has been the pattern in the past over devolution.  [Scottish Independence: Weighing up the Economics, Birlinn, p.147]

Here are five key elements for an urgently needed Labour strategy for the future of Scotland and the whole United Kingdom:

1.  Labour should promise that if the 2014 referendum goes against independence, a future Labour government will negotiate a further significant expansion of devolution for Scotland. According to the polls, more Scots want this than want independence or the status quo, and there’s no conceivable reason not to agree to it. Why should Scotland have less control of its own internal affairs than California or Rhode Island in the US or New South Wales in Australia?

2.  Labour should recognise that full self-government for Scotland will prompt pressure for the same status for England, Wales and Northern Ireland, and should agree to make this its long-term aim (and to work tirelessly for a national consensus in favour of it).

3.  This would result eventually in a fully federal constitution for the UK and its four nations, and would entail, eventually, a separate parliament and government for England, probably sited in the midlands or north of England.

4.  The transfer of further extensive powers to the parliaments and governments of the four UK nations will greatly reduce the functions and powers of the federal parliament at Westminster, justifying a radical reduction in the size of the (already semi-federal) House of Commons and especially of the House of Lords, the latter from nearly 800 at present to a maximum of 100 in the new elected federal Senate, in which (as in the US and Australia) all four nations would have equal representation, an essential protection for the smaller nations against domination by the biggest.  The creation of a new modest-sized parliament for England would thus be consistent with a sharp net reduction in the total number of UK politicians.

5.  There is no other durable or feasible answer to the West Lothian question than a gradual move, over 15 to 20 years, to a federal UK constitution as proposed, supported by a broad consensus across the whole political spectrum.  It would create a lasting, democratic relationship between the four UK nations and between them and the federal centre, satisfy the legitimate aspirations of the Scottish and increasingly the English (and Welsh and Northern Ireland) peoples, and complete the long interrupted devolution process of which Labour is, or should be, the proud godfather.