The 2008 Nobel Peace Prize awarded to Martti Ahtisaari couldn't be more welcome or more spectacularly well earned.  I have been a respectful admirer since I was involved for a few years in 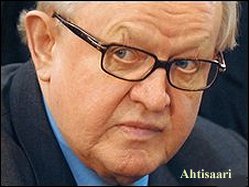 the Namibia independence negotiations.  Ahtisaari, an experienced, calm, unpompous, shrewd, bulky Finn, was the United Nations Administrator appointed to represent the UN Secretary-General in the lengthy and arduous negotiations and later, in the run-up to independence, to run the huge, controversial territory in harness with the South African apartheid government which had finally been persuaded to abandon its claim to Nambia and to allow it to become independent under the original United Nations plan.  His task was to arbitrate between the demands of the South Africans, those of SWAPO (the majority black party in Namibia demanding independence), of the other political parties, white, black and mixed, in Namibia, of the so-called Front Line States (the independent African countries bordering or near Namibia), of the western Contact Group (the five western countries which had been members of the Security Council when UN Security Council resolution 435 had been adopted in 1978 and which undertook the task of negotiating its implementation), of all the other governments and legitimate or self-appointed parties to this enormous dispute, ranging from the OAU to the Vatican, of the Security Council itself (constantly required to add fresh interpretations or new provisions to the parent resolution) — and all necessarily within the framework of resolution 435, the sacred text without which nothing could have been accomplished.  There can be few men or women who could have succeeded in such a monumental task;  Ahtisaari brought it off, and on 21 March 1990, Namibia became independent, twelve long years after the adoption of resolution 435.

Later, in 1999,  Ahtisaari, by now the elected President of Finland, was one of three men who collectively brought about an end to the disastrous and illegal NATO bombing of Yugoslavia by persuading the Serbs, led by Milosevic, to accept a radically revised settlement plan under which the Serbs would withdraw their troops and police from the Serbian province of Kosovo, to be replaced by an international security force and administration.  The other two authors of this achievement were Strobe Talbott, then US Deputy Secretary of State and a former Rhodes Scholar, and Viktor Chernomyrdin, former prime minister of Russia.  The settlement negotiated by these three allowed — indeed obliged — NATO to terminate a bombing campaign that was increasingly obviously failing to achieve any of its several proclaimed objectives, killing increasing numbers of innocent civilians wholly unconnected with the Kosovo dispute, causing mounting unease among NATO member governments, and encouraging its principal cheer-leader, Tony Blair, to step up his vociferous public demands for a land invasion of Kosovo by NATO ground troops — something which, if attempted, might well have resulted in a calamity on the scale of the attack on Iraq four years later.  For this alone Ahtisaari deserved a Nobel Peace Prize.

In addition to these extraordinary successes in Namibia and Kosovo, Ahtisaari was involved in successful international mediation efforts in Aceh (Indonesia), Iraq, Northern Ireland, Central Asia and the Horn of Africa.  He was also the author of the proposals for a kind of intermediate form of internationally supervised independence for Kosovo after the province's eight years of international administration, although there's room for a difference of view about whether this has helped the search for a long-term and durable settlement of that thorny problem.  However, given the pressures for a short-term 'solution', that drawn up by Ahtisaari was almost certainly the best that could have been devised.

It's difficult to think of any single individual who has contributed so much to peace in his own lifetime as Martti Ahtisaari.   His combination of diplomatic qualities constitutes a text-book for any aspiring practitioner of that much abused trade:  an unrivalled capacity for viewing a dispute through the eyes of all the parties to it, identifying in each case real as distinct from asserted interests and objectives; a poker face that never gives away his thinking;  willingness to talk and listen to anyone, however junior or however exalted, who might be able to contribute a new angle;  a phenomenal memory;  constant awareness of the need to stay rigorously within the boundaries of his mandate, however limited;  courage, including bluntness when required;  an ability to rise above his national identity so as to represent that amorphous entity, the international community, in complex negotiations, with all the extra authority that this status confers;  and inexhaustible patience.  What a man!

As a postscript, I note that the only other international figure with a comparable array of diplomatic talents and achievements whom I have ever encountered (apart possibly from Britain's and the UN's Brian Urquhart) was another Finnish international civil servant and mediator, Kurt Janssen, personal representative of the UN Secretary-General appointed to co-ordinate the colossal and controversial Ethiopian international famine relief operation in 1984-86.  Janssen, alas, is no longer alive to win a Nobel Peace Prize for his extraordinary achievement in Ethiopia (and for similar achievements in Cambodia and other crises).  I was privileged to work closely with him and to observe his exceptional talents at close quarters during most of this period.  It's no exaggeration to say that several million Ethiopians alive today owe their lives to Kurt Janssen.  Janssen's book, written with Michael Harris and Angela Penrose, is an indispensable record of that crisis and the international relief effort which it generated.  Let's hope that Finland keeps up the supply of outstanding international civil servants with the character and skills to promote peace and international humanitarian activity, commodities both precious and in regrettably short supply.